The 2021 MDM is just days away. Let's get MDM24 (Jan. 3-5, 2020) into the historical record now.
January 2020. We crowded into the Whaling Museum to share another Moby-Dick Marathon. In the innocence of our hearts! (This year's MDM25 will have some folks reading from the museum, but most will stream their reading from home. With luck and discipline, the 2022 MDM will be a joyful, in-the-flesh reunion.) [Update, 1/10/21: All the 2021 readings were recorded before MDM25, most at the reader's home, then edited by the Museum into ten (long) streaming videos.]
MDM24 unfurled along the lines of previous years. Attendance seemed slightly down from 2019's banner year, but I can find no reports. Ten-time Dutch reader, Tjitske Zwerver, commented on the number of new faces. Were they lured to the reading by the recent bicentennial of Melville's birth, or was it the not-frigid weather and complete absence of snow?
It was good to see the regulars—people I know only from repeated MDMs. Barbara from Pittsfield was about to retire from her law office job to become a volunteer at the Berkshire Athenaeum, helping to organize Hershel Parker's archive of Melville material(!); "dozens of boxes." [See here & here.] Jessica Kent passed on a link to her Harvard Master's thesis, "That Unfailing Comfort Is, It's All Predestinated": Ishmael's Calvinist Journey in Moby-Dick. Much appreciated (even if the contemplation of Calvinism makes me despair for humanity).
New at MDM24:
The museum dedicated the 2020 MDM to David Blanchette of West Wareham, who died October 19, 2019. His artwork is recognizable on marathon buttons and signage. He was author and illustrator of children's books, including Xico. (Follow the link; you'll recognize his drawing style.)
Edward Camara Jr. of Mattapoisett died November 17, 2019. He was honored on the Reader Program as "a stalwart supporter of this event, who missed only one Marathon between 1997 and 2019." 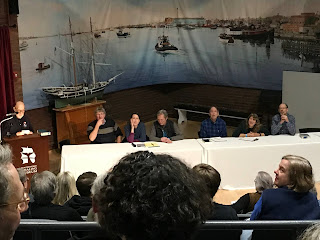 10:00 AM
Stump the Scholars, with emcee Capt. Michael Taylor (substituting for Michael Dyer), and scholars from Teaching Melville: Timothy Marr (UNC), Jennifer Baker (NYU), Christopher Sten (George Washington U.), Robert K. Wallace (U. of Kentucky), Mary K. Bercaw Edwards (U. of Conn. & Mystic Seaport), and Jeff Markman (New Trier H.S., substituting for Wyn Kelley).
Among other things, we learned that after the 1866 fire in the Seamen's Bethel, the pews were reoriented to face away from the street, and the current blunt steeple was added, replacing a bird-watching stand(?)! 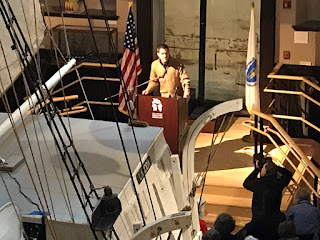 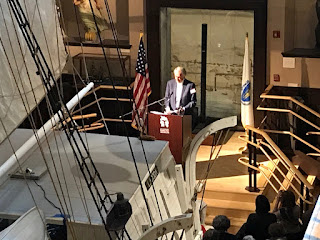 Senator Edward Markey continued Chapter 1, which was particularly resonant given that articles of impeachment were about to be submitted to the Senate. 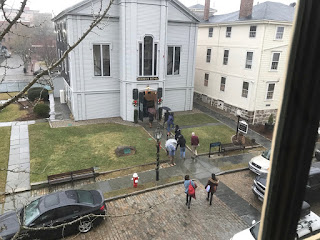 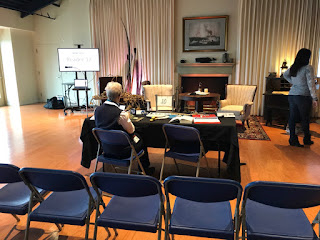 1:45 PM
While the action was away in the Bethel, there was time to admire the "set design" by Michael Lapides, Director of Digital Initiatives. Note the glow in the faux fireplace, the objects on the mantel and table, the whaling print, the lamp on the desk,... I'll bet it looked great on the video stream. (Sadly, the video has disappeared from YouTube. "Google is not in the preservation business.")
This year, readers had a choice of armchair or lectern. 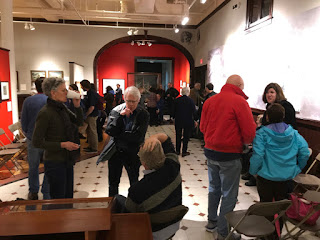 2:30 PM
Chat with Melville Scholars (seen here just breaking up) —
These "chats" grow larger every year, and with good reason. Lots of grist here, seeded by members of the Melville Society. What will the focus of M-D be for the 21st century? Melville as "memorialist" of the whaling industry. Ahab is to M-D as Dr. Frankenstein is to his monster. Was Ahab based on Charles Wilkes? 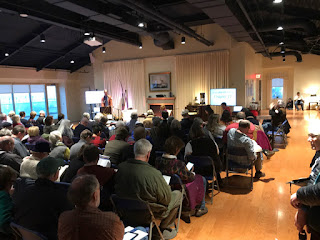 4:00 PM
Solid attendance through the afternoon. 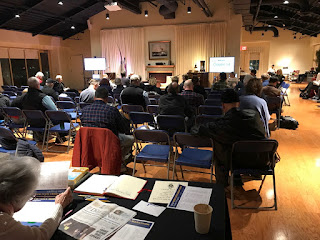 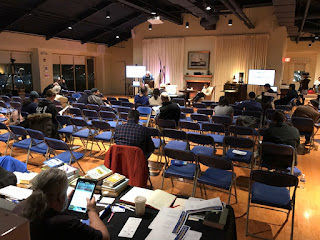 1:21 AM
Well into the marathon's Graveyard Shift. 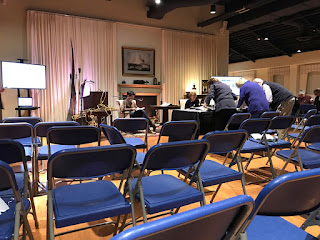 3:50 AM
The readers continue while Watch Officers confer on the line-up. 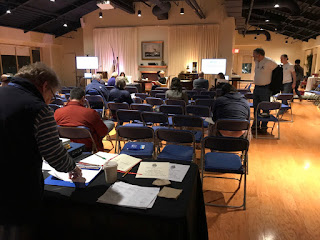 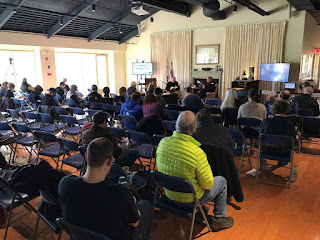 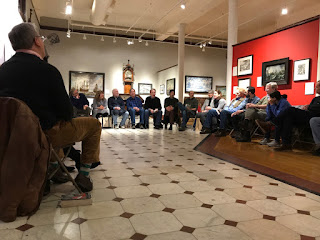 10:00 AM
The second Chat with Melville Scholars —
Recommended books: Ahab's Rolling Sea, Richard J. King; Trying Leviathan, D. Graham Burnett; Toni Morrison's essay on Melville in The Source of Self-Regard. Chapter 61 changes Ishmael's view of the whale. Lemuel Shaw as surrogate father to Melville, and some connection to Captain Vere in Billy Budd. Melville got books from the Boston Athenaeum through Shaw. Was M. "high on something" when he wrote Tartarus of Maids? 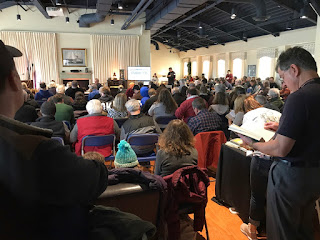 12:35 PM
Full house for the finale.
The female readers of the last chapters were a pleasant respite from the hoarse growl usually voiced for Ahab. 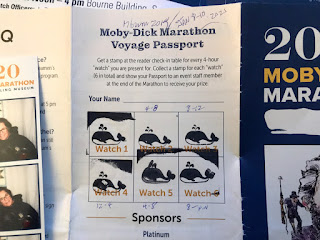 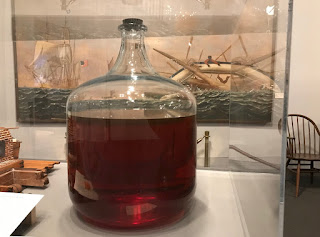 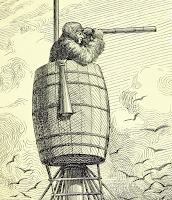 Keep an eye on the Whaling Museum website, YouTube channel, and Facebook page during this shelter-in-place period! The museum staff are busy making their collection available on the Web, often with expert interpretation.

Beginning Friday, April 17, at 5 P.M. Eastern, the museum will make available a one-hour video segment from a recent Moby Dick Marathon. The closing chapters will be read by folks currently in "lockdown" at home.

Tours of the Collection

The Museum from Home series is an ever-expanding set of resources for students and parents.

The current exhibition of Dutch maritime paintings, De Wind is Op!, is now behind closed doors, but a wealth of material is available online:

If you have wandered the museum during the Marathon's "Graveyard Shift" and browsed the items in Turner Gallery (where we used to read Cetology), you'll want to watch these videos guided by Akeia de Barros Gomes, Curator of Social History; and Michael Dyer, Curator of Maritime History.

The Mystic Seaport Museum offers its share of digital treasures, including a cool "Behind the Scenes" series.

Posted by Gansevoort at 5:19 PM No comments:

In your "insular Tahiti"...

These recordings of M-D could ease the monotony of isolation. All are available as free, downloadable .mp3 files. So load up your audio device of choice for those home-bound sessions of low-impact aerobics.
One caveat: All of these readings are from some copy of M-D that does not include the corrections made (by Hayford, Parker, and Tanselle) for the 1988 Northwestern-Newberry edition (discussed previously).

Photo: Wikimedia Commons
Posted by Gansevoort at 12:25 AM No comments: 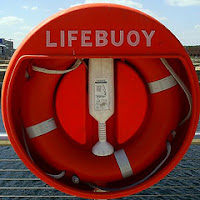 The Whaling Museum just announced that it will close immediately due to "the growing concerns related to the coronavirus."


The Museum plans to remain shuttered to the public through March 27, 2020. Consult the Museum's website for updates.


Think of the fevers, yellow and bilious! Beware of the horrible plague!
- Chapter 71

...a time to hunker down with a good book.
Posted by Gansevoort at 11:23 AM No comments: 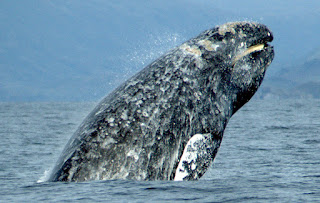 Biologists have already demonstrated that many animals can navigate by somehow sensing Earth’s magnetic field lines. Gray whales, which migrate over 10,000 miles a year through a featureless expanse of blue, might be relying on a similar hidden sense.
- New York Times, 25 Feb. 2020

The Times article quoted above summarizes a study published in Current Biology; a collaboration of Duke University biologists and an astronomer from Chicago's Adler Planetarium. The research looks at strandings of healthy gray whales, chosen because they have "one of the longest migrations of any mammal, an extensive history in the stranding database, and [are] near-shore migrator[s]." (Near-shore is where "small navigation errors increase the risk of stranding.")

Previous studies have correlated these strandings with solar magnetic storms, but were the strandings the result of alterations of the Earth's geomagnetic field, or did the storms somehow "disrupt the animal's receptor itself"?

Examining the influence of climate/season, magnetic field displacement, and radio-frequency noise, the researchers conclude that the whales' navigation errors are "best explained by increases in RF noise rather than alterations to the magnetic field." The analog that comes to mind is headlights of oncoming cars when you're walking at night.

One of the authors, biologist Jesse Granger, notes that such RF noise is not the sole cause of gray whale strandings. Her hope, according to the Times, is "to unlock the secrets of magnetic navigation."

Posted by Gansevoort at 4:34 PM No comments:

Email ThisBlogThis!Share to TwitterShare to FacebookShare to Pinterest
Labels: whales

Updated 12/27/2019 to include video stream and #mobydickmarathon hashtag. 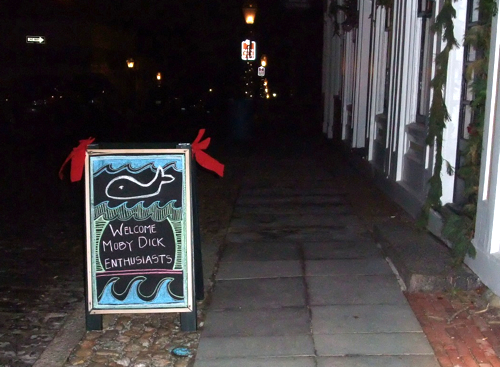 We are now four weeks from the 24th annual Moby-Dick Marathon.

If you're planning your first MDM, you'll find some practical advice in this post from 2011 and in the "Essentials" section at the right of this page. Check out the Whaling Museum's MDM page, too.

For stay-at-homes, a live video stream will commence at 11:30 AM, Saturday.


If you are set to be a Reader, here's a list of uncommon words you might encounter (courtesy of the 2014 NYC MDM).

Latest News from the Feejees - 11 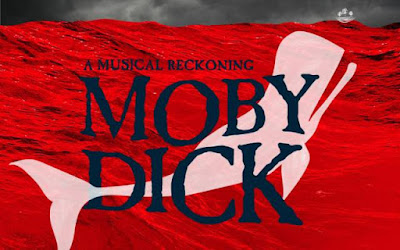 Enjoying its world premiere in Cambridge, MA, through January 12.

Posted by Gansevoort at 5:12 PM No comments:

Email ThisBlogThis!Share to TwitterShare to FacebookShare to Pinterest
Labels: Moby-Dick, popular culture, theatre
Older Posts Home
Subscribe to: Posts (Atom)
Sincere thanks to the team of dedicated staff and volunteers from the Whaling Museum and the Melville Society. Your work creates a uniquely enjoyable event for hundreds of us.