Melville is the one that should keep novelists up at night

A segment in last Friday's broadcast of On the Media (20 Apr 12) caught my ear. In it, writer Tom Bissell recounts how "random events can rule the destinies of the greatest works of art."

The works of Franz Kafka, Walt Whitman, Emily Dickinson, and our Herman might have been forgotten, even lost, but for something as arbitrary as a particular person wandering into a used book store.

Melville is the one that I think should keep novelists up at night.


Bissell tells how Moby-Dick was "a resounding un-success" when first published, selling "three thousand copies over its thrity-six years in print." (Does that count sales in England?) By the turn of the 20th Century it was unpublished and unread. Sometime in the early 1900's, "according to the legend," critic Carl Van Doren found a copy of M-D in a used book store, recognized it as a masterwork, and wrote about it. A Melville renaissance followed — his books were brought back into print and have stayed in print since.

The essay that started it all was gathered into Van Doren's study, The American Novel, published in 1921, with a second edition in 1940. Copyright on the 1921 edition has expired; you can find it online.

If you're interested in the current state of the publishing business as it confronts e-readers, copyright extensions, Amazon's under-pricing, and knock-off books (such as "I Am the Girl with the Dragon Tattoo," not by Stieg Larsson), listen to the entire program.
Posted by Gansevoort at 1:46 AM 1 comment:

In Appreciation of Karen Allen

I was surprised not to see Karen Allen, past Event Director of the Whaling Museum, at January's MDM. She was at all my previous Marathons, in "friendly housemother" mode, making sure the sleepover party that is the MDM didn't get out of control. (No food on the balcony while the exhibits are open!) She's moved on, but the museum staff I spoke with didn't know where.

At my first MDM, when I was ignorant of the sign-up list for those who intended to stay for the entire reading, Ms. Allen noticed me bleary-eyed on Sunday morning and made sure that I got the recognition gift, and Peter Whittemore handshake, accorded to folks who completed the voyage. I would like to have seen her work this year's record crowds.

She has a sound bite in this promotional video. As The Great Durante would say, Good night Ms. Allen, wherever you are. 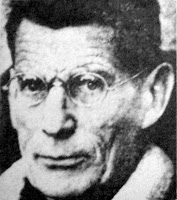 At the age of 26 he read Moby-Dick, and wrote to his close friend Tom MacGreevy, "That's more like the real stuff. White whales and natural piety." (Damned to Fame, James Knowlson, 1996.)

And a slightly-relevant quote from Molloy:

There are people the sea doesn't suit, who prefer the mountains or the plain. Personally I feel no worse there than anywhere else. ... And I too once went forth on it, in a sort of oarless skiff, but I paddled with an old bit of drifwood. And I sometimes wonder if I ever came back, from that voyage. For if I see myself putting to sea, and the long hours without landfall, I do not see the return, the tossing on the breakers, and I do not hear the frail keel grating on the shore.

Posted by Gansevoort at 6:50 AM No comments:

Email ThisBlogThis!Share to TwitterShare to FacebookShare to Pinterest
Labels: history, Moby-Dick, Molloy, Samuel Beckett
Newer Posts Older Posts Home
Subscribe to: Posts (Atom)
Sincere thanks to the team of dedicated staff and volunteers from the Whaling Museum and the Melville Society. Your work creates a uniquely enjoyable event for hundreds of us.