We've said it before and we'll say it again:


This MDM was the museum's twentieth. The bulk of it was held in the spanking new Harbor View Gallery, on the top floor of the recently erected education center.

Gone from the marathon were the whale skeletons "swimming" overhead. Gone was the reading of the Cetology chapter in front of the mighty sperm whale skeleton. The 180° "Harbor View" rather compensates for these losses. (Of course, nothing prevents the marathoner from moving to the skeleton gallery for a private reading of Cetology, perhaps with the live stream playing on a networked device.)

Gone were the distracting conversations of new arrivals at the rear of the Jacobs Family Gallery. These were replaced by the repeated "ding" of the new elevator.

Also gone was the balcony at the back of previous MDMs. That was a great place for a midnight doze, with the readers' voices filling your dreams. This time, marathoners kipped in adjoining rooms and on the floor below—a darkened classroom on the 2nd floor kept a video stream of the reading going through the night. The snacks-area on the ground floor was spacious, with a laptop playing the video stream as well.

This year's readers seemed better prepared and more articulate than ever. The general vibe felt respectful of the text and the "institution" of the MDM.

(Note that the museum's Facebook page has photos, video clips, and links to media coverage of MDM20; video of the reading is archived here.)

Arthur Motta (Director of Marketing & Communications at the museum) gave the Friday night talk, How Moby-Dick Influenced New Bedford. He showed how, starting from 1922, films involving whaling kindled interest in the city's history, and led to the revival of historic New Bedford. It was entertaining (with clips from old films and newsreels), and informative:

Saturday morning started as usual with Stump the Scholars. Emcee Michael Dyer (Senior Maritime Historian at the museum) gave another in his series of imaginative, witty introductions to two teams from the Melville Society:

The questions tended not to trip up the scholars but to generate discussions, with contributions from the audience. For the record, the Kings won. 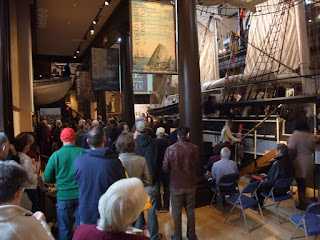 With noon approaching, we gathered in the Lagoda Room. This year's crowd looked to be the biggest yet thanks to the mild weather, the 20th anniversary, the recent film In the Heart of the Sea, and the appearance of Nathaniel Philbrick as first reader. 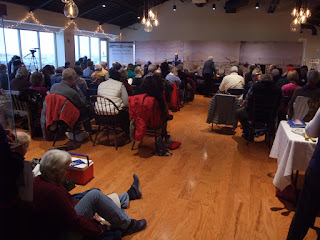 After the Seamen's Bethel chapters (about 2 PM), it was standing-room-only in the new Harbor View Gallery.
About this time I ducked out to the Chat with the Melville Scholars. The "Chats" are my favorite part of the MDM these days. 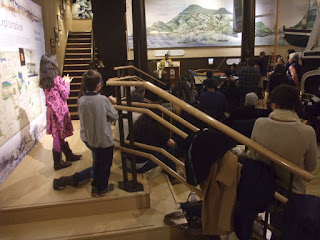 The 4-hour Moby-Dick Maratona em Português ran in parallel with the English-language marathon. It was a family affair, em uma linguagem tão bela! 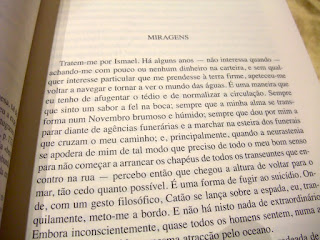 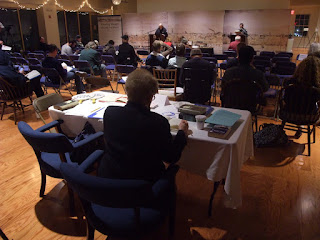 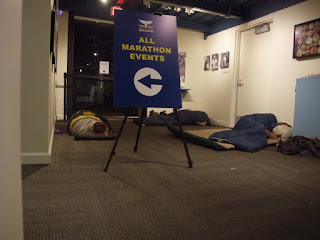 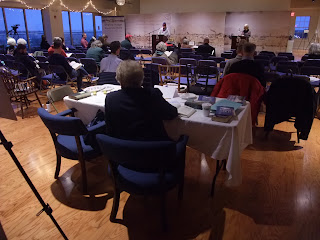 6 AM. About this time a certain museum president was seen clearing the night's detritus from the room: empty coffee cups, discarded water bottles, paper scraps,...
Respect! 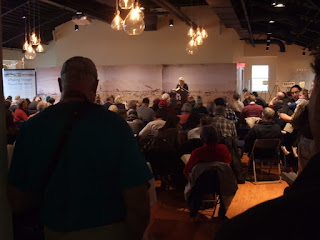 Noonish—full house for the closing chapters. 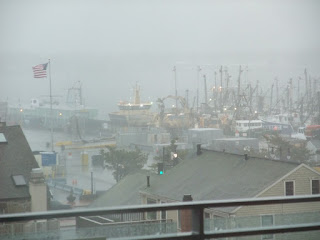 Rain lashing down as MDM20 wraps up. 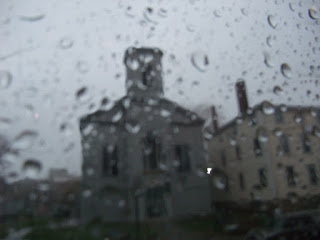 At least it wasn't snow! 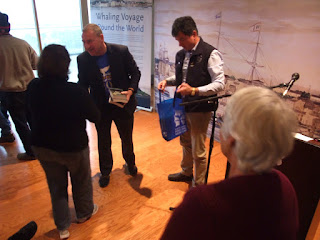 The twentieth M-D Marathon is now underway. It would not surprise me if this year's attendance far surpasses the record crowd of 2012.

If you are reading this before 1 PM Eastern Time, January 10, you can:

Posted by Gansevoort at 12:43 PM No comments:

Email ThisBlogThis!Share to TwitterShare to FacebookShare to Pinterest
Labels: MDM20
Newer Posts Older Posts Home
Subscribe to: Posts (Atom)
Sincere thanks to the team of dedicated staff and volunteers from the Whaling Museum and the Melville Society. Your work creates a uniquely enjoyable event for hundreds of us.