The Dynasts is a three-volume epic poem (in the form of a drama that could never be staged) by Thomas Hardy (1840-1928).  Published between 1904 and 1908, it depicts the Napoleonic Wars through the actions of heads of state, generals and admirals, and the man in the street, with framing commentary by various "shades" and "spirits" that observe humanity.

My cursory research has not turned up any evidence that Hardy read or was aware of Moby-Dick.  (The Oxford Reader's Companion to Hardy [2000], for example, contains no entry for either Melville or Moby-Dick.)  All the same, in volume one of The Dynasts—in Part First, Act Fifth, Scene IV, to be exact—Hardy puts a very Ahab-like speech in the mouth of Admiral Nelson.  In the scene, set aboard the Victory at the battle of Trafalgar, Nelson lies dying from a gun shot to his spine.  He gives the order "to anchor" to the officers standing nearby, and one officer asks him if he wishes Admiral Collingwood to be instructed to "take full on him the conduct of affairs."  Nelson says no, that he will continue in command himself:


Give Collingwood my order.  Anchor all.

... By God, if but our carpenter
Could rig me up a jury-backbone now,
To last one hour—until the battle's done,
I'd see to it!  But here I am—stove in—
Broken—all logged and done for!  Done, ay done!

By way of comparison, here's a taste of Ahab:


Carpenter, when he's through with that buckle, tell him [the blacksmith] to forge a pair of steel shoulder-blades; there's a pedlar aboard with a crushing pack. ...

Hold; while Prometheus is about it, I'll order a complete man after a desirable pattern. Imprimis, fifty feet high in his socks; then, chest modelled after the Thames Tunnel; then, legs with roots to 'em, to stay in one place; then, arms three feet through the wrist; no heart at all, brass forehead, and about a quarter of an acre of fine brains; and let me see—shall I order eyes to see outwards? No, but put a sky-light on top of his head to illuminate inwards. There, take the order, and away.

(From Chapter CVIII, "Ahab and the Carpenter.")

How audio recordings saved the whales

From the 12/26/2014 airing of All Things Considered: How in the 1960s recordings of whale songs were made inadvertently by a military researcher, who passed them to a biologist, who passed them to Judy Collins, who incorporated them into a song that helped launch Greenpeace.

Audio stream and transcript here.
Posted by Gansevoort at 6:02 AM No comments: 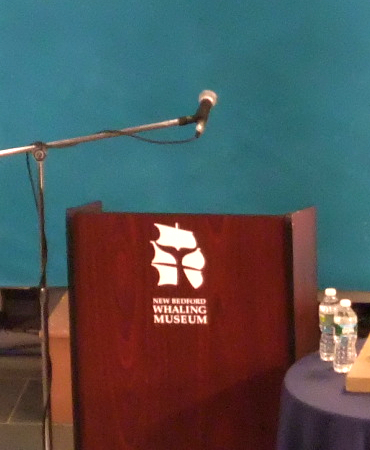 Posted by Gansevoort at 12:38 PM No comments:

No surprise, MDM19 was much like MDM18, MDM17, MDM16, MDM15, MDM14, and MDM13. There were some great readers and some who labored, good sidebar discussions, and quick catch-ups with "marathon friends" old and new.

"Stump the Scholars" on Saturday morning is always a fun prologue to the actual reading. I wish there were an archive of (Senior Maritime Historian) Michael Dyer's intros for this "game show"—they're a hoot. The line-up of scholars this year was:


You have to dig deep if you want to stump this crew. Still, Michael was unusually liberal awarding "I Stumped the Scholars" buttons—four this year. ...and The Clams (Mary, Brad, Chris) won by 1 point. 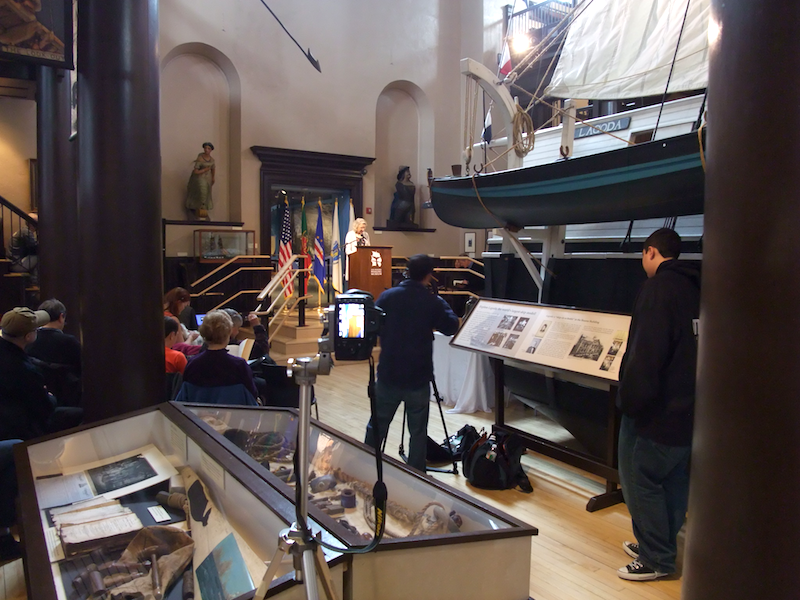 On to the Lagoda Room for the actual reading. For remote observers, streaming this year was audio-only. (Anybody out there want to sponsor a video stream?) The audio archive is online; Museum President James Russell opens the reading at 37:30 in the first clip. Philip Hoare gave a spirited reading of the start of Loomings, but did not tether himself to the podium so his audio level is uneven. New Bedford mayor Jon Mitchell read Chapter 6 ("...in New Bedford, actual cannibals stand chatting at street corners...")—nice touch.


If it's true that every MDM has a slightly different character, this year's seemed to have a large contingent of first-timers. Folks laughed at all the little jokes in the early chapters, and the crowd just felt "shiny and new." That said, it looked like there were fewer people than the crush of recent years. Was this somehow the result of New Year's Day on Thursday, despite the weekend's fair weather?

A new Father Mapple was in the Seamen's Bethel, Rev. David Lima. It was amusing to see him fiddle with his digital tablet while enacting a 19th-century preacher. 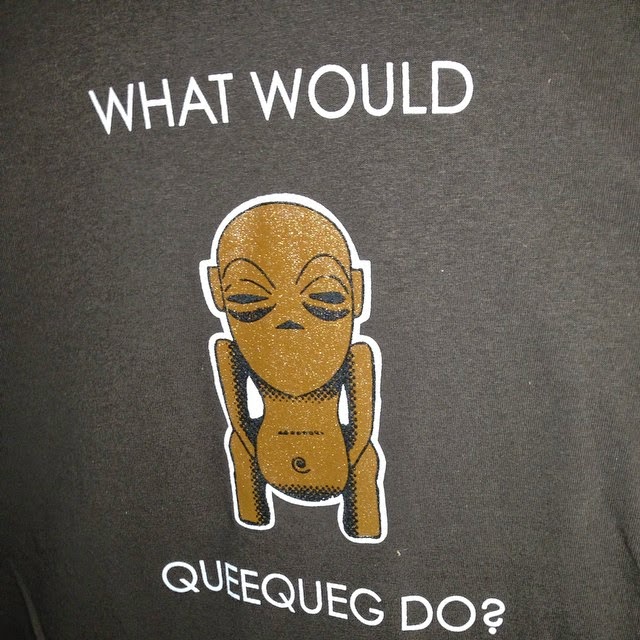 Back at the museum some nice t-shirts were spotted:
got whales?
What would Queequeg do?
I would prefer not to.
Call me [front] Ishmael [back]

One big disappointment—I clean forgot about Saturday's "Chat with a Melville Scholar." Apparently a major topic of discussion was Ahab's psychology. Bummer!

The "Children's Mini-Marathon" was new this year. Youngsters read from an abridged M-D in a separate gallery. Whatever they may have taken from the story, the few readers I heard did a fine job. 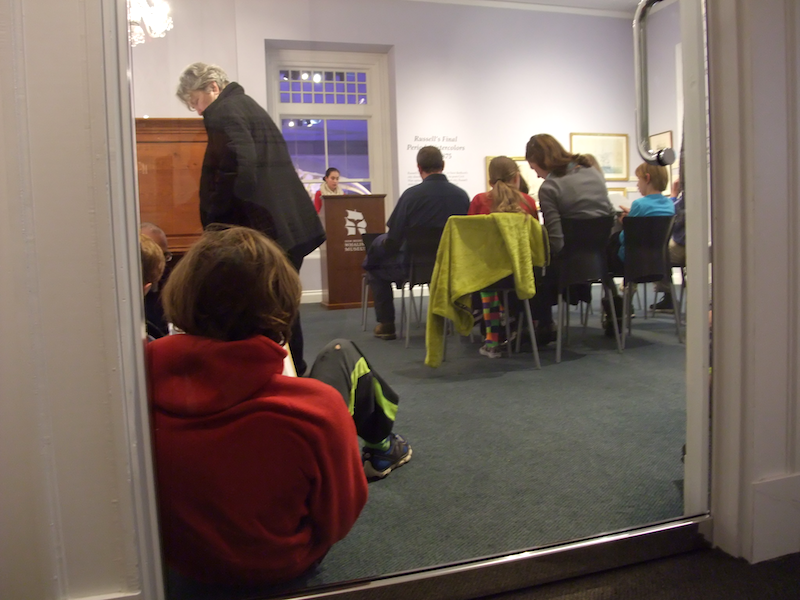 Although attendance seemed (to me) down this year, the balcony was more crowded with sleepers than ever. Not having a sleeping bag or pad to define "my" space, three times I returned from a coffee- or bio-break to find someone sacked-out where I had been! We're going to need bunks up there!

Email ThisBlogThis!Share to TwitterShare to FacebookShare to Pinterest
Labels: MDM, MDM19
Newer Posts Older Posts Home
Subscribe to: Posts (Atom)
Sincere thanks to the team of dedicated staff and volunteers from the Whaling Museum and the Melville Society. Your work creates a uniquely enjoyable event for hundreds of us.