The Industrial Backdrop to Moby-Dick 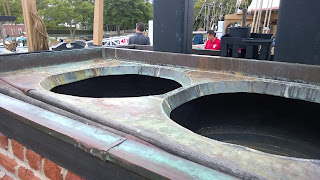 The try pots on the Charles W. Morgan

To appreciate what Melville was doing in Moby-Dick, and to understand how the book might have struck most readers when it first appeared, it's important, I think, to keep in mind that Melville was writing about a then-thriving industry.  The age of sail, of course, was still very much alive, just as the "age of air travel" is today.  To the extent that whaling, before Moby-Dick, had anything of a romantic aura, it revolved mostly around the exotic locales that whalers visited, not the work that whalemen actually did.

The work of whalemen was bloody, dirty, smelly, and in many ways repulsive, and whalemen themselves were generally coarse and uneducated.  In addition to being sailors and whale killers, they were butchers and processors of animal products.  The forecastle, where most of the men lived at sea, was dark, cramped, often ill-ventilated and malodorous, and bug-infested.  (In the whaling memoir Nimrod of the Sea [1874], pg. 284, William M. Davis recalls how, after a meal, "each fellow slips his plate into the netting over his berth, and the cockroaches see to it that his crockery is clean for next meal.")

I've often wondered what industry of today is viewed by modern readers in much the same way that 1850s book-buyers might have viewed whaling.  What work is ongoing, dangerous, and physical -- even in its most up-to-date form -- and, while not really new, still somewhat unfamiliar and intriguing to moderns?

I think a good candidate is offshore oil drilling in the North Sea.

Consider:  Oil drilling has been practiced for about 150 years.  In 1850, offshore whaling had been practiced for about 180 years (since the early eighteenth century).  Deep-sea oil drilling began in the mid-twentieth century, about 70 years ago.  Whaling in the south Pacific began in 1791, about 60 years before Moby-Dick.  And both jobs are hard and dangerous -- a good idea of the dangers involved in North Sea oil drilling can be obtained by watching the episode in the National Geographic series "Seconds from Disaster" on the 1988 Piper Alpha disaster, which took 167 lives.

Imagine the genius required to write not just a good novel, but a masterpiece for the ages, about oil men working on a drilling platform in the North Sea.

(The points about the history of whaling are based on Chapter 2 of In Pursuit of Leviathan [1997].)
Posted by Lemuel at 5:23 PM No comments:

Melville and the Iron Duke 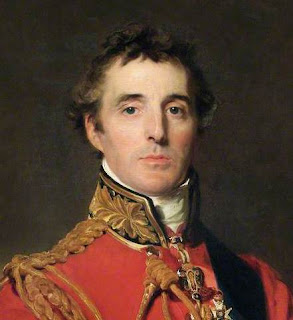 The Duke of Wellington, who led the allied forces to victory over Napoleon at the battle of Waterloo, famously declared to his troops at the decisive moment, "Up, Guards, and at 'em!"  While historians have long doubted he actually said that (Wellington himself couldn't remember what he may have said), the command attributed to him seems to have been as familiar to nineteenth-century English speakers as "a date which will live in infamy" is to us today.

A quick search on Google Books has turned up a pre-Moby-Dick reference to the saying in a New York periodical:  The June 1846 issue of The Eclectic Magazine of Foreign Literature, Science, and Art reprinted from Punch a humorous exchange of letters in which one Adolphus Carns tried to have the Duke settle a bet over whether he had said, "Up, Guards, and at 'em," or "Guards, up, and at 'em!"   Wellington declined to decide the dispute.

What does all this have to do with Melville?  Scholars have shown how Melville's writing in Moby-Dick echoes Shakespeare frequently and, less often, other authors he was reading at the time.  And something that sounds a lot like an echo of Wellington comes from the mouth of the Tahitian Sailor in "Midnight, Forecastle" (Ch. 40): "The blast! the blast! Up, spine, and meet it!"

Incidentally, in what might be called the battle-of-Waterloo section of Part I of Finnegans Wake, Joyce plays with the command attributed to Wellington (amid references to the Sepoy Mutiny of 1857 and Alice's Adventures in Wonderland and who knows what else):  "This is the seeboy, madrashattaras, upjump and pumpim, cry to the Willingdone."

Posted by Lemuel at 8:22 PM No comments: 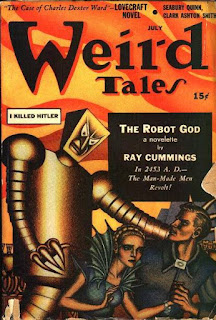 In 1935, George Bernard Shaw remarked that thanks to the radio, he could hear more good music in a week than he could have heard "in ten years, if at all," back in the 1880s when he was writing music criticism in London.  Shaw's startling demonstration of the cultural impact of technology often recurs when I think about everything the Internet makes available today.

As recently as twenty years ago, you would have had to turn to the best university libraries if you wanted to consult the enormous mass of printed material you can now read, wherever you are (just about), with a few keyboard taps.  Earlier this week, while rereading the selection in the Norton Critical Edition 2nd from a 1992 paper by Geoffrey Sanborn, I wanted to take a look at the 1823 review essay by Sir Francis Palgrave, "Superstition and Knowledge," that Sanborn shows was one of the minor tributaries feeding into Melville's mind as he toiled over Moby-Dick.  After two or three minutes of searching, I found the very thing, starting at page 245 of this collection of Palgrave's writings.  Not only was it fast; I could save it as a searchable PDF for future reference.  And no scrounging for coins to feed into a smelly library copying machine.

I well remember how excited I was, in the early 1990s, to learn that the nearest state university library had a full set of Robert Southey's The Doctor, which is often mentioned as a possible inspiration (in form) for Moby-Dick.  But now Southey's work is at my fingertips, at any time and from time to time.

And just take a look at this, courtesy of Harvard and Mr. Google.  O brave new world, that has such resources in 't! 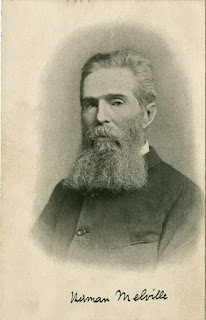 A persistent criticism of director John Huston's 1956 Moby Dick is that Gregory Peck was too young to play Captain Ahab.  Born in 1916, Peck was about 40 when the film was released -- more than ten years younger than Leo Genn, the actor who played Starbuck.  As some pointed out, it would have made more sense if Peck and Genn had switched roles.  Genn, however, while an accomplished British film actor with a splendid voice, had no star power.

A few remarks by Ahab in Chapter 132 ("The Symphony") enable the reader to pinpoint his age at the end of the novel's action as 58.  Ahab there tells Starbuck that he struck his first whale 40 years earlier, as "a boy-harpooneer of eighteen!"  But Ahab's all-around agedness is noted throughout the novel.  He is, among other things, a "scornful old man," "the queerest old man," a "monomaniac old man," an "ungodly old man," an "insane old man," a "wondrous old man," a "frantic old man," a "crazed old man."

(Others aboard the Pequod described as "old men" are the blacksmith, the cook, and most intriguingly, Fedallah (in Ch. 48).)

To Melville, who (mirabile dictu) was in his very early 30s while writing Moby-Dick, 58 must have seemed quite old.  To me, who hit 58 recently, it doesn't seem old at all.  Granted, I'm a landsman, "pent up in lath and plaster," not running around a ship on a peg leg and throwing lances at sperm whales.  Moreover, 58 was indeed old for a whaling captain.  The authors of In Pursuit of Leviathan gathered age data for 275 whaling voyages out of New Bedford between 1842 and 1858.  The oldest recorded man on any of those voyages was 62, and only 12 men were over 50.  (See the tables on pp. 94-96.)  As the authors point out (p. 90), "on 50 percent of the voyages for which we have [New Bedford] Port Society lists, the oldest man aboard was thirty-five or younger."  (Emphasis added.)

The significance of Ahab's being an old man has been much discussed.  From a purely practical standpoint, it helps make more believable that Ahab could bend the entire crew to his will, notwithstanding repeated bad omens and his occasionally dotty behavior.  The reader has to be willing to accept that even the intrepid whale-hunter Starbuck could not withstand the "spiritual terrors" that menaced him "from the concentrating brow" of the "enraged and mighty man."  (Ch. 26.)
Posted by Lemuel at 12:09 PM 2 comments:

Email ThisBlogThis!Share to TwitterShare to FacebookShare to Pinterest
Labels: Ahab, whalers, whaling, work
Newer Posts Older Posts Home
Subscribe to: Posts (Atom)
Sincere thanks to the team of dedicated staff and volunteers from the Whaling Museum and the Melville Society. Your work creates a uniquely enjoyable event for hundreds of us.