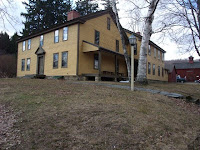 Expanded my carbon footprint today, driving out to the State University of New York, Albany to see Bill Pettit's exhibit of some of the highlights from his Moby-Dick Collection. (All Over Albany has a nice interview with Mr. Pettit.)

Drove the back roads to Arrowhead, knowing it's closed until Memorial Day weekend, but hoping to get a few snaps. Passed groves of sugar maples, tethered together with what looks like surgical tubing, collecting sap into plastic holding tanks; cubes, about 5-feet on each side. (Forget about galvanized pails and horse-drawn sleds!) A couple of sugar houses were in operation, steam pouring out of their vent windows. Lots of work and sweat to yield that pint of syrup. For God's sake, be economical with your pancakes and waffles! 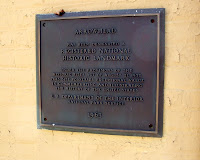 Passed Miss Hall's School, "one of the foremost college-preparatory schools for girls in the country," established 1898. I hope the girls study Moby-Dick—they're just a short walk from Arrowhead.

There was a crew of about eight men (volunteers, and definitely not unskilled) working on the rear addition to the original house. At some point (in the 1940's, guessing from the wallpaper), there were four apartments and three bathrooms in this wing. The volunteers were in the process of removing the bathrooms (to save on property taxes, I was told). I was led up the back stairway, through an old kitchen, to see Melville's library, freshly painted, and the newly opened "Hawthorne room" (not yet furnished). Whatever its age, the wing felt solid underfoot, like it was built with pride. Thanks for the tour, guys! 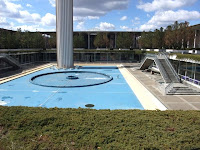 On to the big city (Albany), and the State University of New York. Wouldn't you like to be a fly on the wall of an architecture class at this school? That's a carillon next to the skating rink / landing pad / Unisphere plinth. The library is behind the carillon. 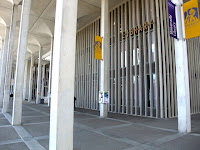 Steel yourself and enter the cage labeled "Library."

The Moby-Dick exhibit is just inside the entrance, arranged in two cases. 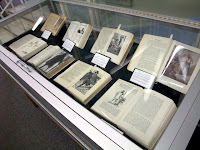 One display of eight English-language editions, from 1930 to 1989, each opened to an image of Ahab. 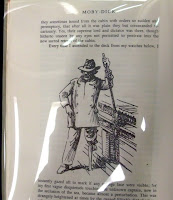 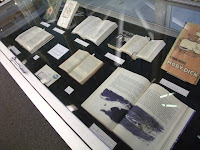 One display of foreign-language editions, together with some "artifacts" from the career of the estimable Professor Hugh Maclean—his "study copy" with his penciled notes in the margins, and...

Mr. Pettit reflects on the "meaning" of the exhibit on his blog. In whatever form our beloved texts come to us, they are the result of the dedication and skill of untold numbers of our forebears, who worked to pass an author's creation ahead to one more generation of readers.
Posted by Gansevoort at 1:31 AM