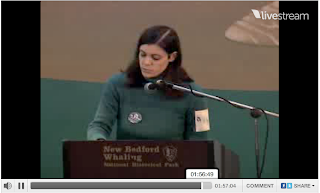 If you're not able to make it to New Bedford this weekend, you can watch a live stream of the entire Marathon. Last year's inaugural stream was very well done — the camera and audio techs stayed attentive for the entire 25 hours, following the Marathon as it moved to the Seamen's Bethel, and through several rooms in the Museum. The streams were available later as archived recordings. (You can view recordings of MDM15 now, although they may be replaced by MDM16.)

Note 1: My Safari browser under Mac OS X 10.5.8 has trouble with the video player, but Firefox works fine.

Note 2: If you tune in before the kick-off at Noon this Saturday, you may only see a static image or some canned footage.
Posted by Gansevoort at 8:00 AM