Another Report on the 2011 New Bedford Moby-Dick Marathon 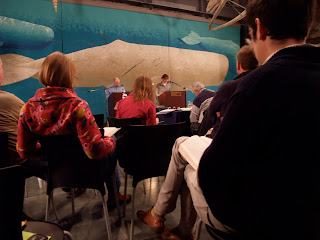 A writer named Meera Subramanian attended the entire Moby-Dick marathon this year and has posted a thoughtful account of her experience, with pictures, at Killing the Buddha.  Interestingly, she had never read Moby-Dick before.  Nonetheless, she seems to have had quite a good time:

Some of the readers in New Bedford were born preachers .... They read neither too slow nor too fast. They lingered over words. They savored the stage directions of punctuation. Others were young, or inexperienced, or melodramatic. The resulting flavors were humorous (when an English captain took on a thick Brooklyn brogue) or painful (when the most basic words were mispronounced, prompting one friend to quip, “So that’s how Latin turned into English.”). Yet there was always something fabulously democratic about the mélange. Our lack of reading aloud, or perhaps more accurately, our lack of listening, is the death of our pronunciation. Moby-Dick is advanced; there are deceptive nautical terms where only half the letters are pronounced and 25-cent words galore. When they were spoken correctly, they sang. We listeners learned.


The "stage directions of punctuation" is a nice touch.