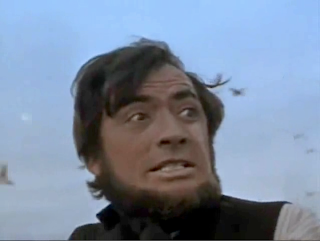 As Patti Smith told an interviewer who asked why she wore those strange clothes, "It looks cool."

As Lemuel suggests, confusion over the phrase "Ahab beckons," invented for a not-aimed-at-the-literati Gregory Peck period-revenge thriller (viewable online), shows how much a part of our culture Melville's original work has become. (Although I was shocked last month to find that my friend's college-junior daughter had never heard of the book or the movie. "What's Moby Dick?" A teachable moment, I guess.) Should we view Ray Bradbury's script as a mashup? (Doesn't that term sound quaint?)

Nor should we bookish types be smug. The prow-shaped pulpit in the Seamen's Bethel to which we troop for the reading of the "Father Mapple" chapters was only installed in 1961, in response to visitors' expectations after having seen the movie. (When the legend becomes fact, print the legend.)

Me, I'm a fatalist who loves a jolly memento mori.

Remember me as you pass by,
As you are now, so once was I,
As I am now, so you will be,
Prepare for death and follow me.

And I love the complete quote from the movie: Ahab beckons. He's dead but he beckons. It calls to mind a favorite phrase from Samuel Beckett's The Unnamable: ...the ancient dead and the dead yet unborn...

But why say more? Ahab beckons each of us readers. Even Ishmael's story had its end.

Speaking of Beckett, here's another bit from The Unnamable that could have been in the mind of any of the Pequod's crew (as it was often in the mind of a certain corporate wage-slave, also on a rather long lay):

I, who might that be? The galley-man, bound for the Pillars of Hercules, who drops his sweep under cover of night and crawls between the thwarts, towards the rising sun, unseen by the guard, praying for storm.