The Mural at MDM15 (and the "longness" of the Whale) 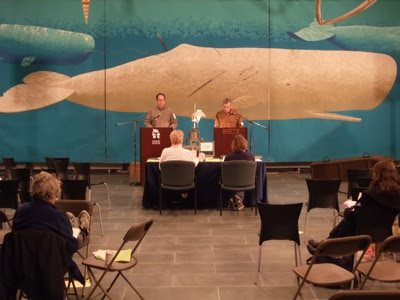 The impressive backdrop at this year's Marathon is the work of Richard Ellis. From the photo, I estimate the length of the painted white whale to be 25 feet.

According to the Wikipedia article "Sperm whale," the whale that sank the Essex was claimed to be 85 feet long, while the Essex itself (do mariners still say "herself"?) was 87 feet long.

For those who attended the opening of the Marathon, the Whaling Museum's half-scale "model" ship, Lagoda, is 89 feet long.

For those who were at the reading of the Cetology chapter, the Museum's juvenile sperm whale skeleton is 48 feet long. According to Chapter 103, Measurement of the Whale's Skeleton, in life this whale would have been about 60 feet long.

Picture yourself in an open whaleboat (25-30 feet long) attacking a beast three times the size of the one in the mural.

Email ThisBlogThis!Share to TwitterShare to FacebookShare to Pinterest
Labels: whaling