How to Be a Good Moby-Dick Marathon Reader, Part 2 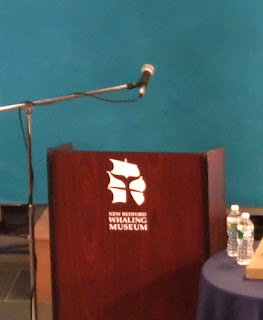 The sine qua non of the New Bedford Moby-Dick marathon is the viva voce reading of all (or just about all) of Moby-Dick.  That's why we make the pilgimage to the New Bedford Whaling Museum, why we go without sleep, why we sit for hours in chairs that become less and less comfortable with every passing moment.  It's all about the book.

Hence the next principle in our ongoing series:

Rule 2:  Speak the text, the whole text, and nothing but the text.

Your responsibility as a reader is to pick up where the previous reader left off and to read on until you're signaled to stop, when the next reader takes up the burden.  The entire marathon should comprise an unbroken series of different voices that together take us, without frolics or detours, from "Call me Ishmael ..." to "... only found another orphan."

When you read, therefore, you should adhere religiously to what Melville wrote.  The words that he set down, in the arrangements he selected, move us and inspire us to sustain this communal experience.  Without his text, we are become as sounding brass, or a tinkling cymbal.

Ideally, nothing in Moby-Dick should be omitted.  In practice, however, some things are.  The introductory "Etymology" and "Extracts" are deliberately excluded, as I've discussed.  The handling of chapter titles and Melville's footnotes varies from reader to reader; some skip them, others do not.  I would prefer that readers not skip chapter titles and especially not footnotes.  A much more serious matter is the occasional accidental skipping of text.  Readers have been known to skip a couple of paragraphs by accident.  No one likes that, but it is usually allowed to pass in silence.  In 2010, however, one reader skipped so much text (presumably by turning several leaves at once) that the "watch" stopped her and asked her to go back.

By the same token, nothing should be added to what Melville wrote.  The audience wants no jocular asides, no dedicatory prefaces, no autobiographical embellishments, no pleas for indulgence, no shout-outs to peeps.  The participants in the New Bedford marathon take their Melville straight.  He provides more than enough commentary and wit for anyone, and doesn't need our feeble efforts to "improve" upon his work.

Email ThisBlogThis!Share to TwitterShare to FacebookShare to Pinterest
Labels: how to be a good reader, logistics, performance