Today is the 101st birthday of Charles Olson. Fans of experimental, tantalizing, abstruse, marvel-filled, American poetry might know him from his magnum opus, The Maximus Poems.

His first book, however, was Call Me Ishmael (1947). It is the culmination of his research on Melville, begun while working on his Master's degree (thesis: The Growth of Herman Melville, Prose Writer and Poetic Thinker), and continued at Harvard (where his paper Lear and Moby-Dick helped earn him his first of two Guggenheim fellowships).

Olson was one of the first scholars to consider the importance of Melville's reading and marginalia. Part of his work involved hunting down books from Melville's library that had since been passed to family members and collectors. When Olson located a book, he made detailed notes of his interviews with family members, and meticulous transcriptions of Melville's marginalia — all on 5x7 index cards. After the publication of Call Me Ishmael, Olson stored those cards in a trunk in a friend's cellar. Over the years, the cards were damaged by water and mildew. 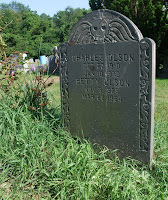 Olson died in 1970 and is buried in Beechbrook Cemetery, Gloucester, Massachusetts. (His Colonial-style slate headstone is proving problematic.)

In 1973, the University of Connecticut purchased Olson's papers. In 2000, a project to conserve his note cards was initiated. The current state of the project (card images and transcriptions) is viewable at the site: Charles Olson's Melville Project.

But back to Call Me Ishmael. It's definitely worth a read, although you may find it "unusual" in its presentation. It is literary criticism as written by a nascent poet — freewheeling and condensed. For example:


To MAGNIFY is the mark of Moby-Dick. As with workers, castaways, so with the scope and space of the sea, the prose, the Whale, the Ship and, OVER ALL, the Captain. It is the technical act compelled by the American fact. Cubits of tragic stature. Put it this way. Three forces operated to bring about the dimensions of Moby-Dick: Melville, a man of MYTH, antemosaic; an experience of SPACE, its power and price, America; and ancient magnitudes of TRAGEDY, Shakespeare.

A "Maximus-style" feature film about Olson's connection to Gloucester is viewable on the Web:

Parts 2 - 6 are viewable at FerriniProductions.com.
Posted by Gansevoort at 7:59 AM No comments:

From Chasing the White Whale, David Dowling's examination of the MDM:


...the all-night feature of the Moby-Dick Marathon reading functions not as an eccentric solipsistic dare so much as a way to collectively expose the cultural anxiety about the death of literature, the death of reading great works unabridged, sans Cliff's Notes, summaries, digital or online shortcuts of any sort. In this light, the New Bedford reading functions almost like a sit-in protest [emphasis mine] against the technological threat posed to the love of long, difficult literature and the patience, endurance, and long attention span it demands.

The death of literature, the erosion of human potential by technology; and our collective struggle against these forces... Here's that clip again:

Posted by Gansevoort at 3:33 PM No comments:

Announced on the Whaling Museum's blog:


At 11:30 a.m. in the Bourne Building, Melville Society members will read many of the 80 brief "Extracts" related to whales and whaling, which Melville included before Chapter 1.

Is someone at the Museum reading this blog? Both Lemuel and I have argued that the MDM curiously omits two chapters of Moby-Dick: Etymology and Extracts. (And the Iron-Bound Bucket concurs!)

Now it appears that the MDM is, at least partially, addressing our pleas. (Why not read all of the Extracts? Why skip Etymology?)

Still, it's clear, the Marathon gets better every year!!

Note: The Bourne Building is that older part of the museum, which houses the Lagoda.
Posted by Gansevoort at 1:09 AM No comments: 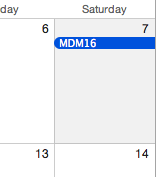 Here we are less than a month away from MDM16. If you cannot be in New Bedford the weekend of January 7 to read along, you can follow the event via the Museum's live video stream (details at above link), and monitor Twitter hashtag #MDM16.

If this is your first Moby-Dick Marathon, we hope that you will benefit from some of the posts on this blog. Lemuel has written on the physical and psychical aspects of the Marathon, and has a paean to the "Graveyard Shift". I culled from the Web recommendations on how to prepare for the all-night-on-your-blunt-end event. For your safety, see Lemuel's health warning.

If you have reserved a spot as a reader, or hope to be called as a standby reader, Lemuel's series can guide you (e.g., Rule 2: Speak the text, the whole text, and nothing but the text.).

Whether you make it to New Bedford this year or not, every mother's son and daughter needs a decent, printed copy of our treasured text. My search for the ideal edition of M-D should provide some grist for your mill.

Some info on parking, accommodations, and restaurants in New Bedford is here.

Finally, preparatory to casting off for the Whaling Museum, read our Marathoner's Checklist.
Posted by Gansevoort at 11:01 AM 1 comment:

Email ThisBlogThis!Share to TwitterShare to FacebookShare to Pinterest
Labels: MDM16
Newer Posts Older Posts Home
Subscribe to: Posts (Atom)
Sincere thanks to the team of dedicated staff and volunteers from the Whaling Museum and the Melville Society. Your work creates a uniquely enjoyable event for hundreds of us.