Latest News from the Feejees - 7

Posted by Gansevoort at 12:09 AM No comments:

The eighteenth annual Moby-Dick Marathon (MDM18) was held by the New Bedford Whaling Museum on January 4-5. Because of the mid-week snowstorm, the speaker set for Friday night, librettist Gene Scheer, was re-scheduled for Saturday A.M. In the end, he couldn't get out of NYC, so "Stump the Scholars" was restored to its usual Saturday morning slot.

I was disappointed to miss Mr. Scheer's talk. It would be interesting to hear about the decisions he was forced to make in adapting M-D to the contemporary grand-opera [see Comments] opera form. Also, as with Matt Kish's talk at MDM17, an artist's "take" on M-D can deepen one's appreciation in unexpected ways.

On the other hand, "Stump the Scholars" is not to be missed. It's an entertaining lead-in to the actual reading. "Emcee" Michael Dyer (Maritime Curator) keeps things fun, and the scholars have a very high batting average against the audience. Do you remember Stiggs and how he died? They do.

Then it was off to the "Lagoda room" for the main event. The reporter from WBSM radio somehow found Dutch Melvillians Tonnie & Tjitske—back for their 5th consecutive MDM.

This year's reading kicked off with the MDM's first female Ishmael, Dr. Pia Durkin, Superintendent of New Bedford Public Schools. A local woman standing next to me said that Durkin was "controversial." If you're from New Bedford, you know all about that.


Each MDM has a slightly different character. This year's seemed to be less "reverential," maybe because we were all relieved to have made it through the blizzard. Much of the early-Saturday and late-Sunday audience seemed to be there not to share a cherished book, but to observe the spectacle. Maybe not. ...But I wasn't the only one to notice that the crowd noise on Saturday afternoon was over the limit. (Those teenage interns just don't have the air of authority of the grizzled docents!) 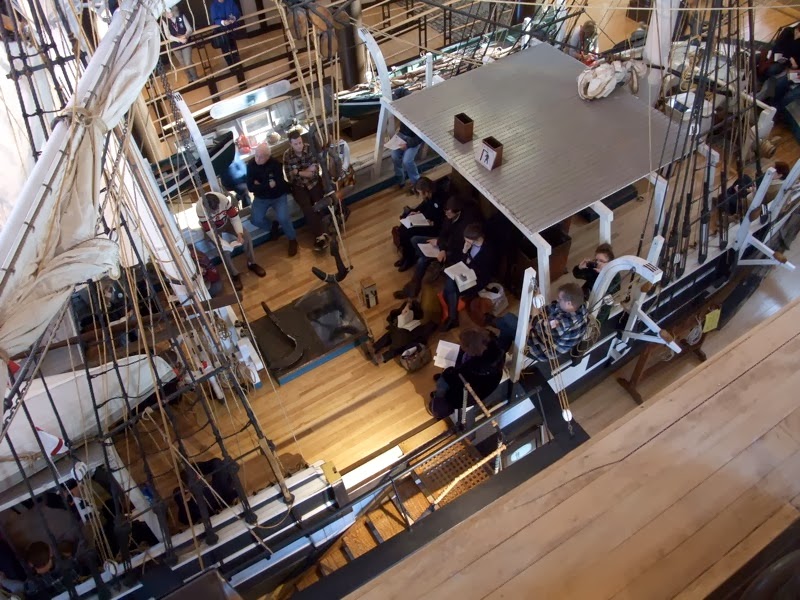 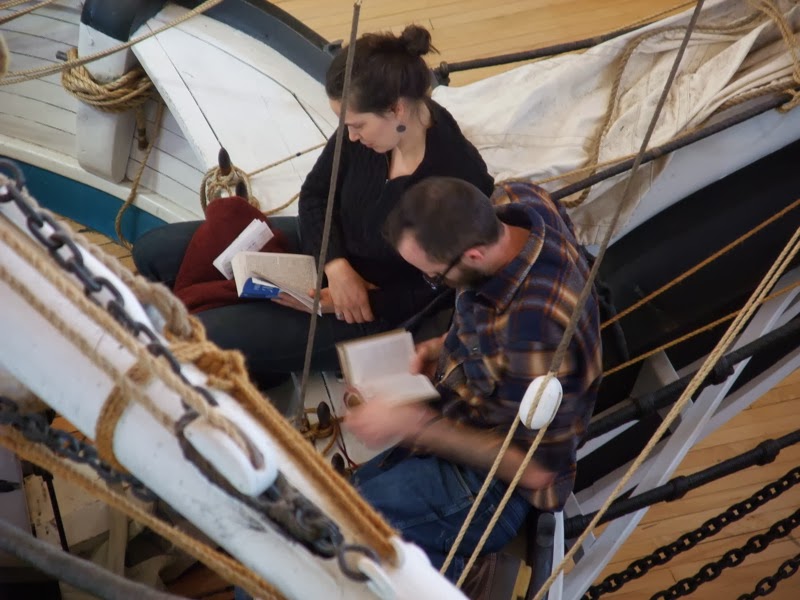 A lot of readers were no-shows, doubtless because of the snows. Bob Rocha scoured the "sleeping balcony" in the wee hours to recruit readers. This year, repeat turns at the podium were for the asking.

Joel and Havarah from KingPost Productions spent most of the marathon in the break room, explaining their just-released Moby Dick strategy card game. Nice folks, patiently answering questions they surely had heard hundreds of times before. Each card has a quote from M-D, so for the uninitiated it could be an entrée into the book; and the artwork is captivating. As in the novel, players hunt whales and confront Moby-Dick. The last player to survive his attacks can say "Call me Ishmael!" (Interestingly, Gene Scheer's libretto likewise uses "Call me Ishmael" as its final line.)


Finally, the sun rose, the crowd swelled, and it was over for another year. Mark your calendar for MDM19: January 3, 2015.

Watch the museum website—the restored Charles W. Morgan arrives in New Bedford in June. The scholars will be back for a "Melville event."


P.S. -
Where was Jennifer Nersesian of the National Historical Park? (One of my favorite readers.)
Where was Peter Whittemore? [Best wishes to you, Peter.]
Why did James Russell, President & CEO of the Whaling Museum, close the Epilogue with "The End" instead of "FINIS"?
The Celtic Coffee House across from the museum is gone, replaced by Tia Maria's (BYOB), but good Guinness can be had at a new pub on Union St., where the Catwalk used to be.

Email ThisBlogThis!Share to TwitterShare to FacebookShare to Pinterest
Labels: MDM18 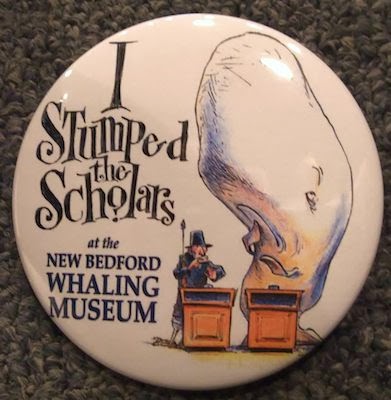 A day to mark with a white stone.
Posted by Gansevoort at 3:18 PM No comments: 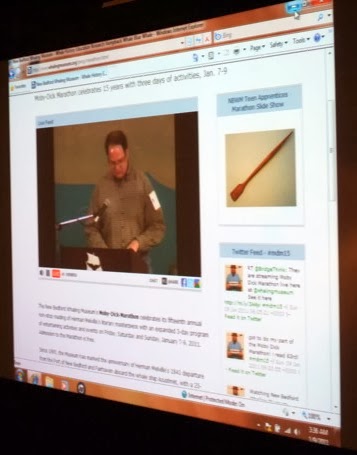 If you can't make it to the Marathon, watch the video stream, live until the reading ends, about 1 P.M., Sunday, Jan. 5.

If you love this annual event, the Whaling Museum has made it easy to support the Moby-Dick Marathon using your credit card.
Posted by Gansevoort at 12:00 PM No comments:

Librettist Gene Scheer is stuck in NYC, so "Stump the Scholars" is back to its traditional spot in the program: 10 A.M. Saturday.

See the revised schedule on the Whaling Museum site.

Circumambulate the city of a dreamy Sabbath afternoon. Go from Corlears Hook to Coenties Slip, and from thence, by Whitehall, northward.      - Chapter I, Loomings

Continuing a look at some of the locations mentioned in the first chapter of Moby-Dick. (See part 1.)

Coenties Slip was a significant feature on the waterfront, cutting inland nearly two blocks. Sometime in the late 1800's it was filled in. Later, Front Street in this area was obliterated by office towers. Today Coenties Slip is largely covered by the New York Vietnam Veterans Memorial Park, with a heliport at what was the slip's mouth.

The name "Coenties" has a history. You won't find it in any telephone directory, U.S. or Dutch. It is a contraction of the Dutch "Coenraedt en Antje"—Coenraedt and Antje. Coenraedt Ten Eyck (alternately Conraet, Coenraet) was born in Germany in 1617, and worked in Amsterdam as a shoemaker's helper. He married Maria Boele; their first child, Jacob C., was born in 1645. The family immigrated to New Amsterdam around 1651. Sometime later, Coenraedt married Antje (no last name found), and "worked as a tanner and shoemaker near his home [...] on his sizable property on what [became] Coenties Slip." (nycgovparks.org)

Now follow me down the generations, using information from the New York State Museum website.
Magdalena Gansevoort was the daughter of "Albany mainstay" Leonard Gansevoort. Leonard had a brother, Peter, "the hero of Fort Stanwix." Peter had a daughter, Maria Gansevoort—mother of our man, Herman Melville!

In short: Herman's first cousin once removed (Magdalena) was the wife of the great-great-great-grandson (Jacob A.) of the couple who gave Coenties Slip its name [step-GGGgrandson of Antje].

I wonder if Herman or his mother was aware of this distant connection to what was, during the time the Melvill family lived in lower Manhattan, a prominent local enterprise. (They moved to Albany when Herman was eleven years old.) The fact is too insignificant to be included in any of the Melville biographies I have at hand.

The final post in this series will look at the Whitehall in the quote above—Herman's nod to his mother's family?

(Note: The full map of 1841 Manhattan can be found at this outstanding Boston Public Library site.)

Posted by Gansevoort at 6:00 PM No comments:

The Friday night talk has been moved to Saturday at 10 A.M., replacing "Stump the Scholars."

See the revised MDM schedule on the Whaling Museum website.