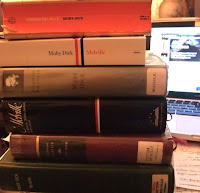 Edited 7/24/18 to include the San Francisco and Sag Harbor events.

For those who may be hesitant to venture to New Bedford in January, here are a few alternatives to note.

August 2-5: The second annual Moby-Dick reading at Arrowhead Farm
This reading runs from 10am-5pm for three days, followed on day 4 by a hike up Monument Mountain before returning to Arrowhead to read the concluding chapters.

Canio's Bookshop in Sag Harbor organized an annual MDM for many years, starting in 1983. The event went dormant for a decade or so, then resurfaced in 2015 and 2017. Will it return in 2019 for Melville's 200th birth year?

The November New York City MDM was bi-annual for a while, but appears to be in hibernation.

The Provincetown Public Library had its 3rd annual MDM in April, but I didn't get the memo. Maybe next year.

Posted by Gansevoort at 4:51 PM No comments:

Email ThisBlogThis!Share to TwitterShare to FacebookShare to Pinterest
Labels: Arrowhead, MDM, Mystic Seaport, New York, the Morgan
Newer Posts Older Posts Home
Subscribe to: Posts (Atom)
Sincere thanks to the team of dedicated staff and volunteers from the Whaling Museum and the Melville Society. Your work creates a uniquely enjoyable event for hundreds of us.