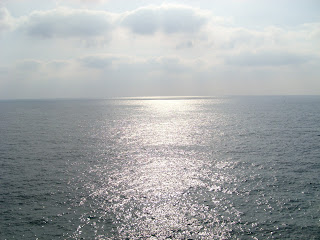 At midnight tonight we'll be midway between MDMs—halfway to the next Moby-Dick Marathon, MDM19. (That is, if we assume MDM19 will follow the museum's pattern of launching the Marathon on the first weekend after New Year's Day.)

Heed the advice of this post—take post-MDM Monday off, and book a room for the night of the close of the Marathon (1/4/14).  New Bedford and neighboring Fairhaven have a number of hotels and B&Bs. The fine Fairfield Inn & Suites is a three-block walk from the Whaling Museum. You'll spot some luminaries of Melville studies at breakfast there.

Lemuel and I will keep an eye on the Whaling Museum's website for definitive schedule info.

Posted by Gansevoort at 6:00 AM No comments:

Email ThisBlogThis!Share to TwitterShare to FacebookShare to Pinterest
Labels: MDM19

Latest News from the Feejees - 8

In his talk yesterday at the Morgan Homecoming, Fred Calabretta of Mystic Seaport mentioned that Ron Howard is completing a film of In the Heart of the Sea, Nathaniel Philbrick's retelling of the the sinking of whaleship Essex ("#1 Best Seller in Ship History" on Amazon). This has been public knowledge for a couple of years, but it was news to this blog.

imdb.com has a page with all the info. The U.S. release date is 13 March 2015. With direction by Ron Howard, it's sure to be a polished production that will put the posteriors in the seats, as they say. Will this high-profile film attract a crush of folks to MDM20 in January, 2016? I'm sure the wheels of preparation are in motion at the Whaling Museum.

Slightly related: A film version of Bill Bryson's A Walk in the Woods is scheduled for release in 2015/16. The Appalachian Long-Distance Hiker's Association is already discussing ways to aid/educate the clueless hordes that will hit the trail in the years following.
Posted by Gansevoort at 12:52 PM No comments:

The New Bedford Homecoming of the Charles W. Morgan

Here's a quick rundown on (some of) today's events surrounding the return of whaleship Charles W. Morgan, newly restored, to New Bedford. The Morgan is "the only surviving wooden whaling ship from the 19th century American fleet." Built in New Bedford, and launched on July 21, 1841, she has been in Mystic Seaport since 1941. A multi-year restoration made the Morgan once again sea-worthy. She sailed into New Bedford harbor to be the centerpiece of a week of activities. Get down there and check it out! (Leave your backpack in the car. They're not permitted.)

Today was a chance to hear presentations from some of the Melville scholars we normally see only at the MDM. As always, these folks make me realize I have a lot of reading to do. Still, when Tim Marr opened his talk asking the audience, "How many of you couldn't finish Moby-Dick the first time you read it?", the scholars were the first to raise their hands!

I took pages of notes at these presentations, but what sticks in my mind is Dr. Marr quoting Stephen Colbert who asked, "Is Moby-Dick a metaphor for the struggle of trying to read Moby-Dick?" (Who was it said, "When one of a work's themes is the work itself, another of its themes is art."?)

The week's displays and events are the combined efforts of the New Bedford Whaling Museum, Mystic Seaport, the Nantucket Historical Association, and the Melville Society. That's some major fire-power, and they've done it up royally.

Like a trade show, there are lots of booths to visit inside the hall. 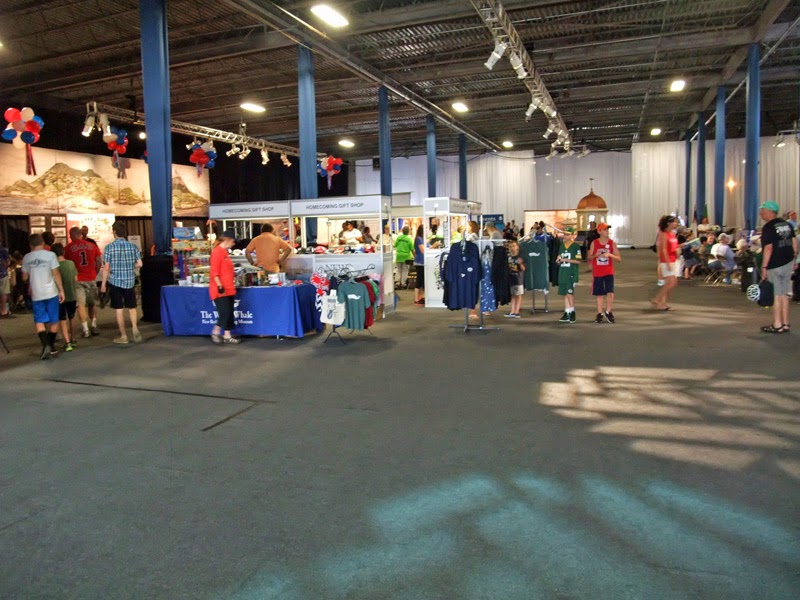 An area is curtained-off for the scholar presentations. 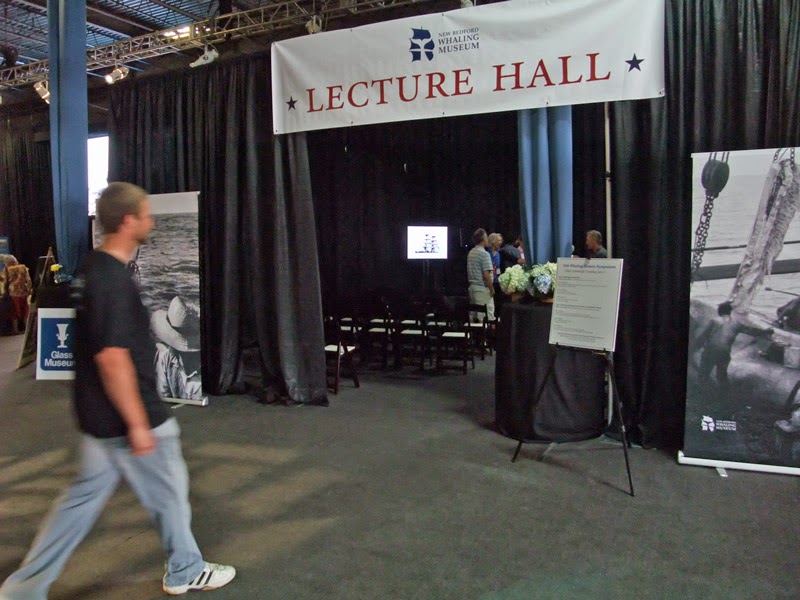 Outside, you can visit the schooner Ernestina. I've only ever seen her covered with snow, on my way to the MDM. 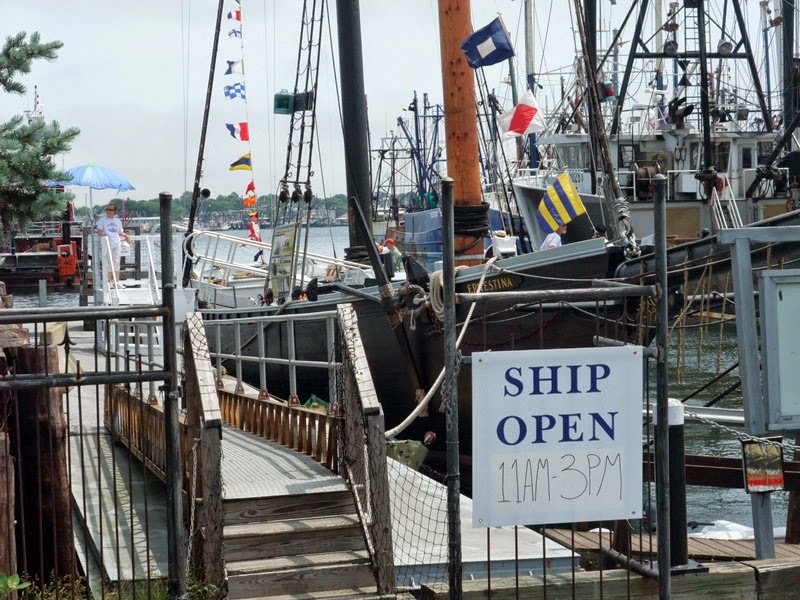 You can crew a whaleboat and row out for a waterline view of the Morgan. Our boatsteerer was a member of a local rowing club, well able to instruct the green crew. 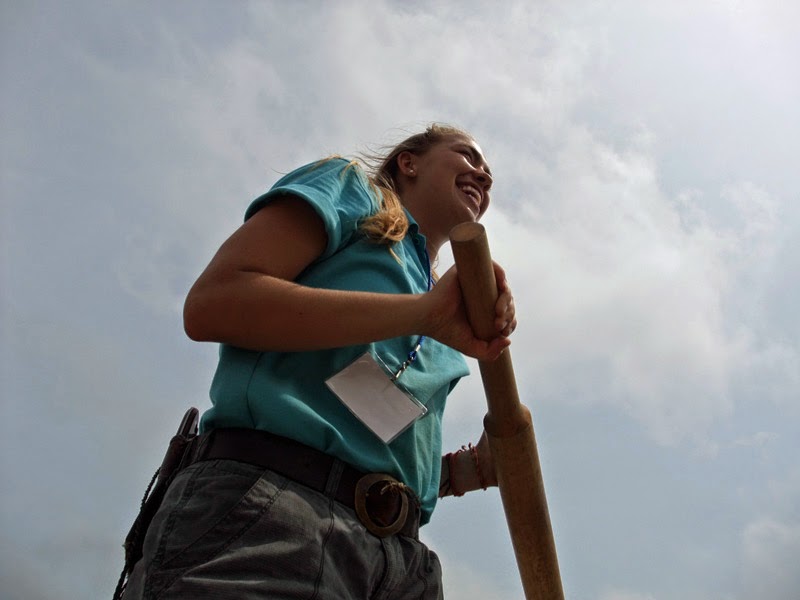 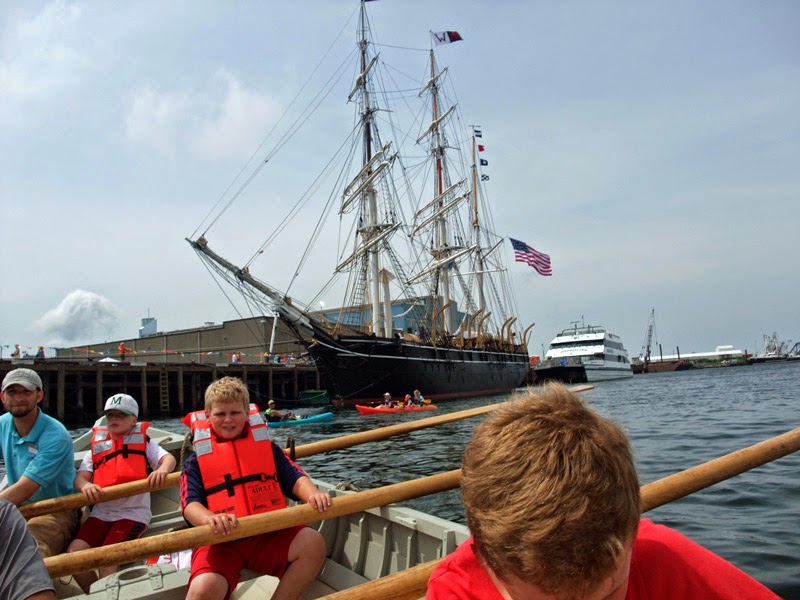 Back on land, it is worth waiting in line for a chance to snake through the restored Charles W. Morgan. 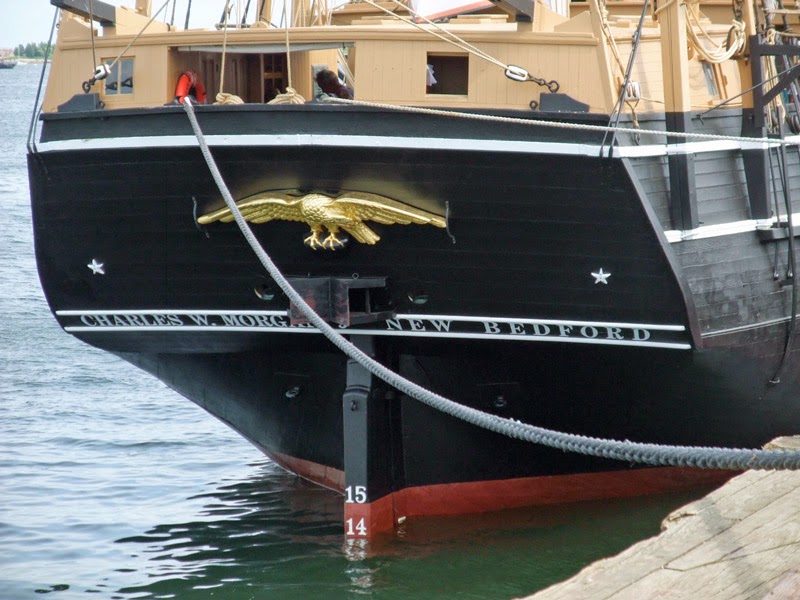 According to Wikipedia, these flags spell "J B P N." What am I missing? 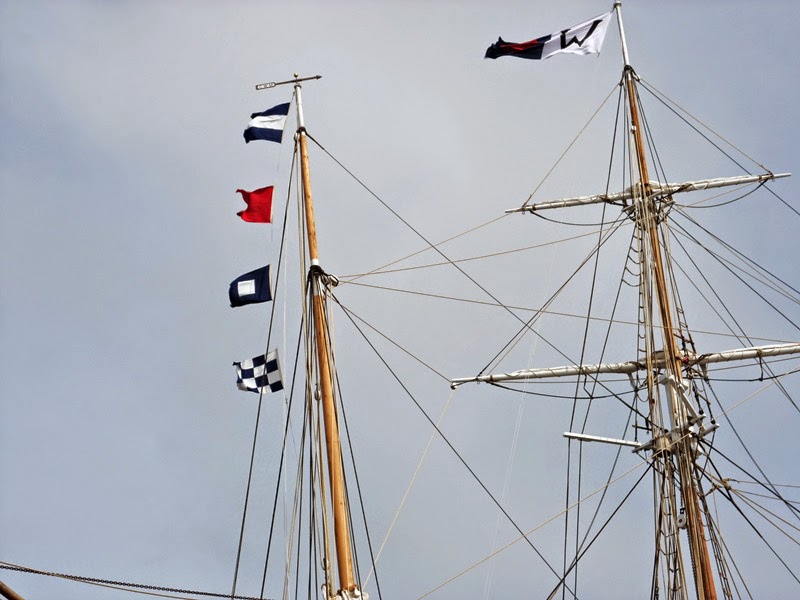 The dark brown areas in the diagrams show original, 1841-vintage bits of the Morgan. 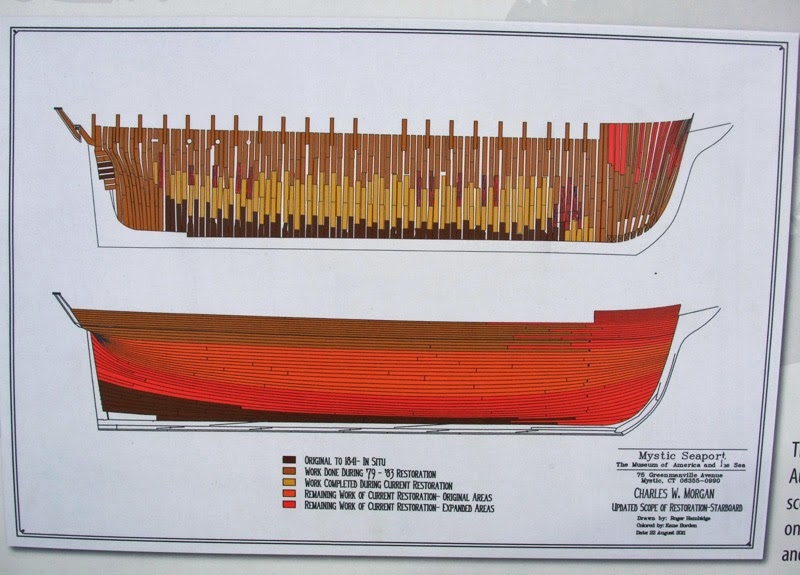 Apparently, "How much is original?" is asked often. 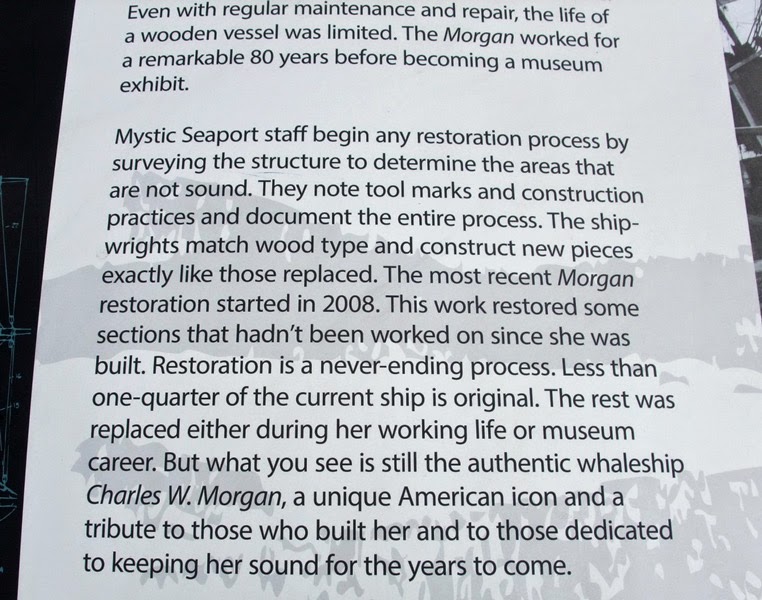 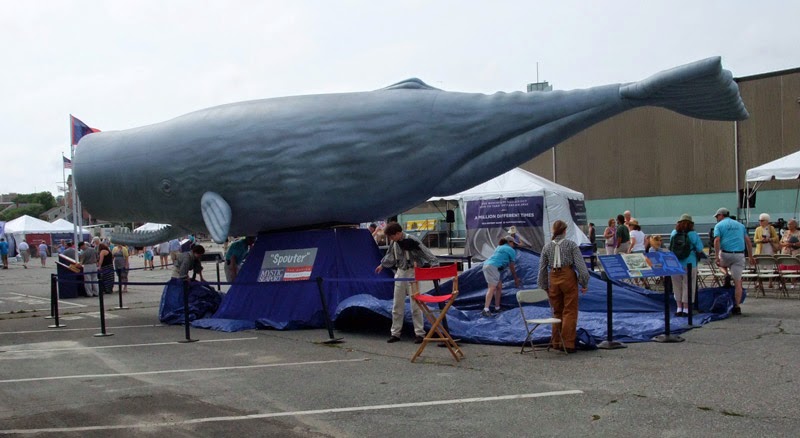 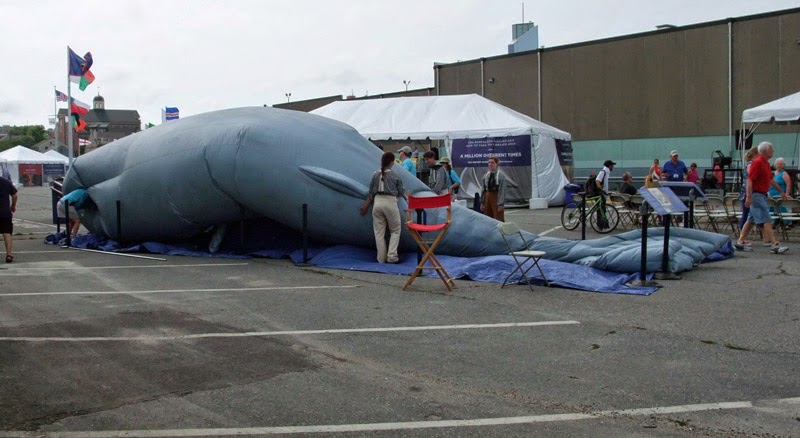 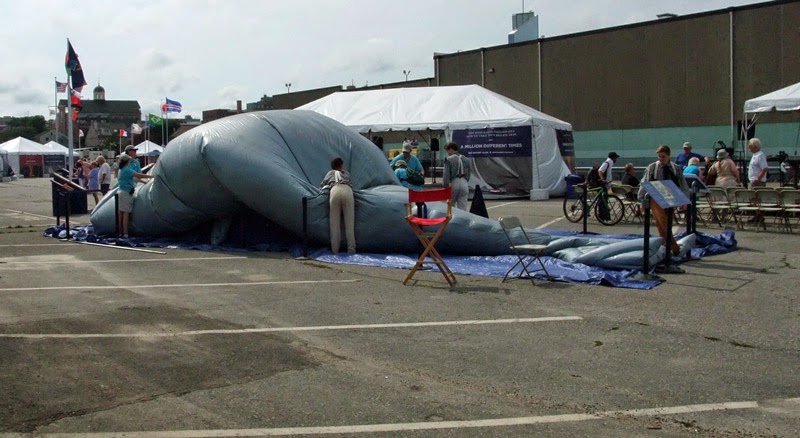 The city is much more inviting on these warm summer evenings than in the January wind and ice of an MDM. 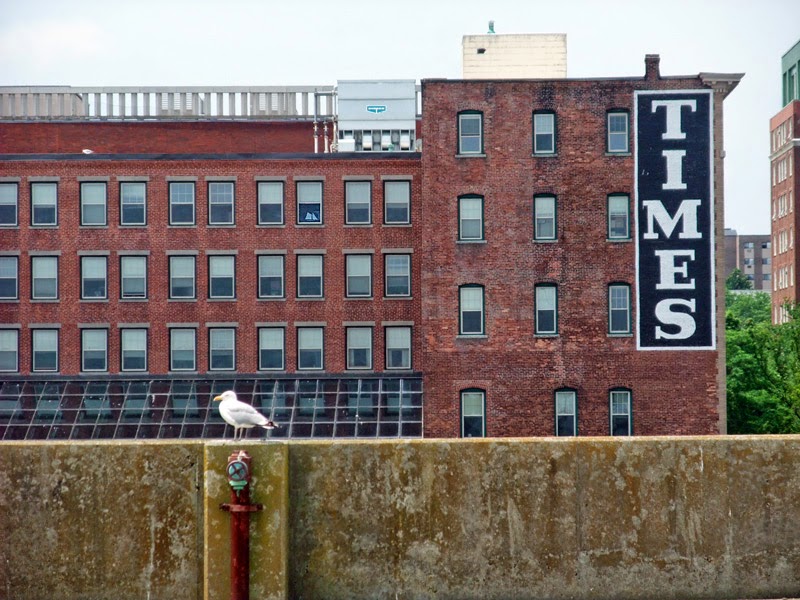 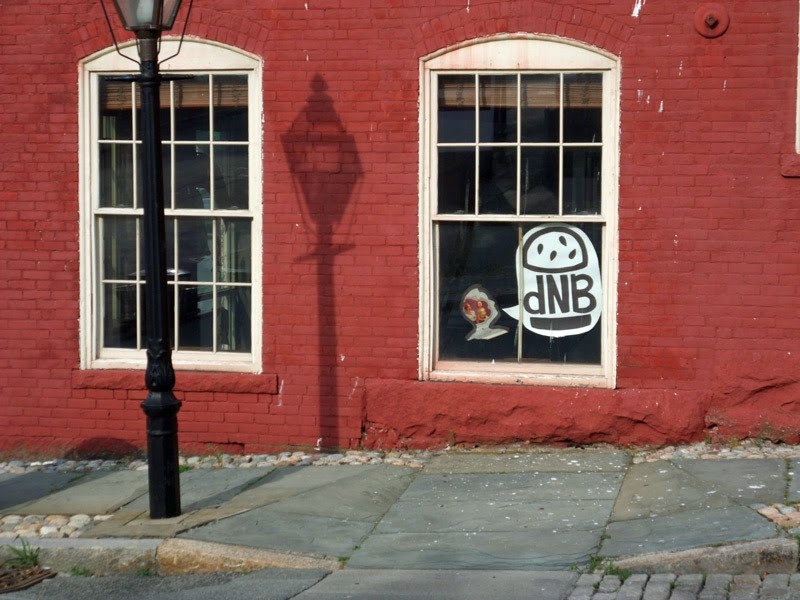 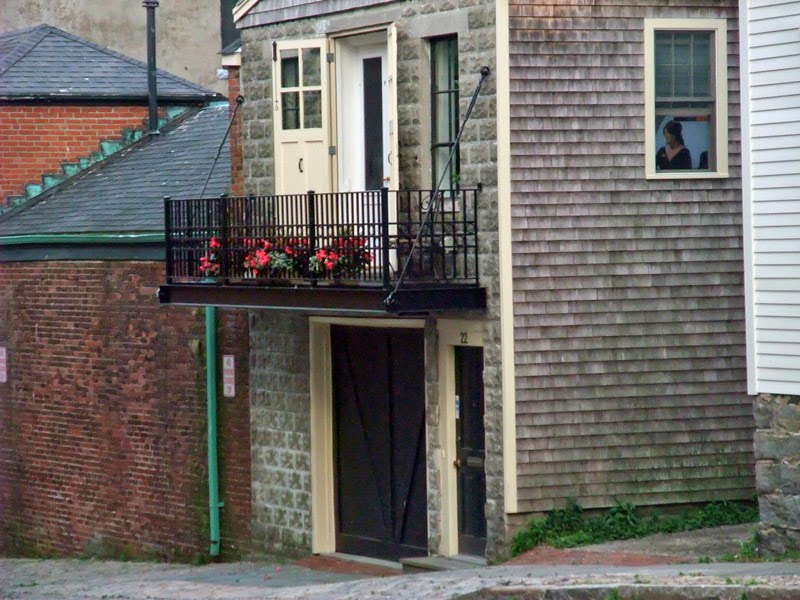 After dinner, Robert K. Wallace opened The Art of Seeing Whales exhibition at the Whaling Museum. Take your time here—the juxtapositions are deliberate. 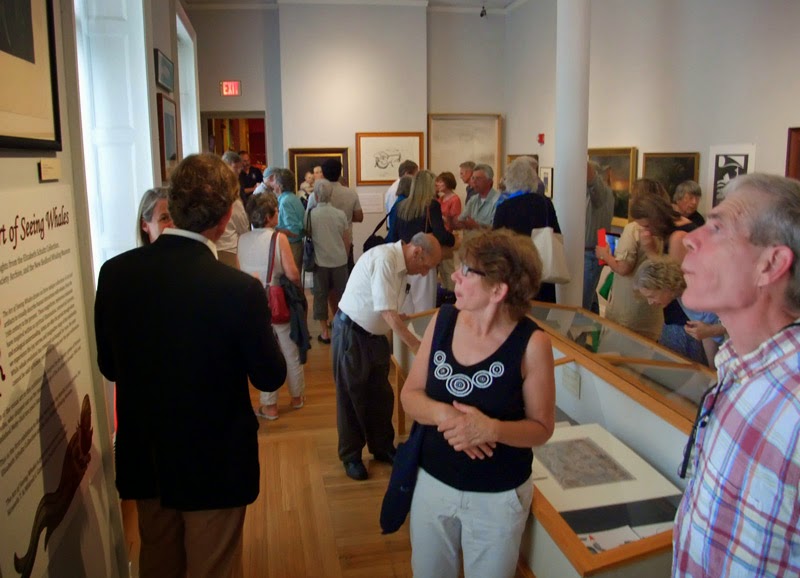 Was anyone else put off by all the humorless, armed police stalking the area? [no photo here]
Posted by Gansevoort at 11:00 PM No comments:

Email ThisBlogThis!Share to TwitterShare to FacebookShare to Pinterest
Labels: 1841, event, Melville, Mystic Seaport, Nantucket, New Bedford, the Morgan, whales, whaling
Newer Posts Older Posts Home
Subscribe to: Posts (Atom)
Sincere thanks to the team of dedicated staff and volunteers from the Whaling Museum and the Melville Society. Your work creates a uniquely enjoyable event for hundreds of us.