One hundred years ago today, on November 16, 1913, the first volume of Proust's In Search of Lost Time was published. Like our beloved Moby-Dick, it has since come to be recognized as one-of-those-works-you-should-read-before-you-die.

At seven volumes and about 1.5 million words, it dwarfs M-D (about 209,000 words). Students complain about M-D's Cetology chapter—Temps Perdu seems to carry Melville's "detail-oriented" approach beyond the limits of human endurance! So I have to wonder, did Proust read Moby-Dick? Was Melville an influence on "the major novel of the twentieth century" (Harold Bloom)?

Looks like probably not. According to Critical Synoptics: Menippean Satire and the Analysis of Intellectual Mythology by Carter Kaplan, "The first French translation of Moby-Dick was not published until 1941." That's nineteen years after Proust's death. So unless Proust was an accomplished reader of English, there's no way. Alas, a review of  Proust's English (2005) in the New Yorker states:


Proust did not speak English, and read it only with difficulty (though he translated Ruskin, with much help from others).

It appears (according to Wikipedia) that Proust's influences were of the "old world": Saint-Simon, Montaigne, Stendhal, Flaubert, George Eliot, Fyodor Dostoevsky, and Leo Tolstoy.

Regarding another favorite "detail-oriented" novel, the question arises: Could Joyce's Ulysses have been influenced by Moby-Dick, or by Temps Perdu?
Posted by Gansevoort at 1:00 PM No comments:

Email ThisBlogThis!Share to TwitterShare to FacebookShare to Pinterest
Labels: Moby-Dick 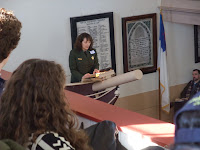 Reader sign-up for MDM18 opens in one week.
According to the Marathon page on the Whaling Museum website,

Lemuel's series, How to Be a Good MDM Reader, might be of interest.
Posted by Gansevoort at 12:01 AM No comments: