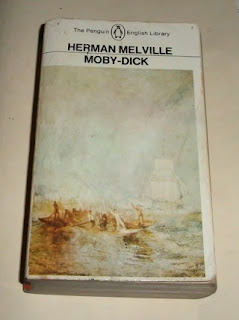 In contrast to Lemuel, with his Signet Classics copy, I didn't seriously attack Moby-Dick until August, 1983. On my first trip to Europe, cycling out of Paris, I wanted something substantial to read to pass the evening hours in my tent. My Junior-year English prof had always touted M-D as "the great American novel," so an English-language edition became my monomaniac thought. (Pity I didn't think of it before leaving cosmopolitan Paris.) A few small-city bookshops had no romans en anglais -- it wasn't until reaching Dijon that it was sighted, in the grand Librairie de l'Université. The shop clerk understood my execrable French (she pronounced it "mo-BEE-dick," I recall), and 42.50 francs (about $5.50 in '83) later I walked out with the object of my quest; noted in my journal: it felt like Christmas morning.
The book is a log, with about half as many pages of ancillary material as there are of the novel itself, but the weight and space it took in my pannier wasn't any concern. I pedaled with it for three months; read it in bars and parks, in hostels and campgrounds; even visited the Heidelberg Tun described in Chapter LXXVII. It was my text at three Moby-Dick marathons, now retired in favor of a sturdy hard-cover copy with larger type (a gift from Lemuel). 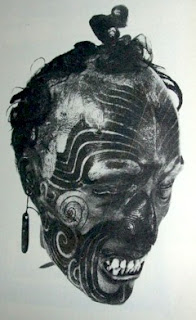 I still consider it an excellent edition. The editor, Harold Beaver, is described as "Reader in American Literature at the University of Warwick." It appears that he wanted to put everything needed to appreciate M-D in a single paperback package, with a dream-like Turner painting on the cover. (I only just now realized that it includes Chase's The Wreck of the Whaleship Essex; Lecomte's Le Cachelot Blanc, in French and English; and Mocha Dick from The Knickerbocker magazine!) There are the usual biography and history-of-composition, with a very useful and readable "Introduction" (more on that in another post). In classy-academic Penguin tradition, there are thorough notes on the differences between the first English and American printings. And in the middle of it all, right where the binding cracks, are eight pages of photographs -- period prints and paintings, a New Bedford whaleship, a gold doubloon, the Bethel, and a mummified Maori head (my mental mascot that summer).
For that first "committed" reading, Beaver's "Commentary" section was my private tutor, greatly increasing my understanding and appreciation of Melville's labors. There is about one page of notes for every two pages of source text. References to the Bible, Milton, Shakespeare, Carlyle, etc. are elucidated. Internal references are tied together. Symbolism is discussed. Technical terms are described. (E.g., what are the carlines?)
I'm not sure if this all-in-one edition is still in print, or if it was ever distributed in the U.S. This book has the same IBSN, mentions Beaver, and lists about the same number of pages.
Look for the shrunken head on the first page of photos -- accept no substitutes!
Posted by Gansevoort at 8:26 AM