Gone but not (completely) forgotten...

Let's stow away January's MDM before the 2020 event is upon us.

MDM23 was one for the books — the bicentennial of Melville's birth was coming in August, the weather was mild (for January), and the roads were clear and dry. The result: "a record crowd." The museum reported "over 1500 through the doors" during the three days. (Ahem, "over 2900" were reported for MDM16.) 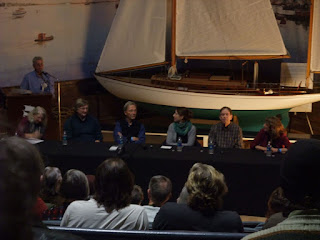 10:00 AM
It's "Stump," with MC Michael Dyer of the museum, and scholars Wyn Kelley (M.I.T), Timothy Marr (UNC), Christopher Sten (George Washington U.), Jennifer Baker (NYU), Robert Wallace (U. of Kentucky), and Mary K. Bercaw Edwards (Univ. of Conn & Mystic Seaport).
Michael was feeling generous. At least nine "I Stumped..." buttons were awarded.
Over the years, we in the audience have learned that you can't stump this group with quotidian queries. Our questions have become ever more abstruse, often causing deliberations to devolve into an open, and informative, discussion. That's entertainment!

On the subject of scholars, I hesitate to mention the "Chat with a Melville scholar" sessions — they are in danger of outgrowing the room. Still, if you want to expand your appreciation of Melville, and fill some gaps in your erudition, make a point of dropping in. This is a very patient and generous group of scholars/educators with a wide range of backgrounds and specialties! 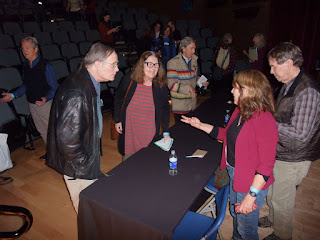 11:23 AM - after "Stump"
Familiar faces, and a welcome sighting of Peter Whittemore, HM's g-g-grandson. 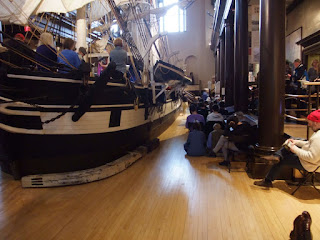 Noon
Jim Braude and Margery Eagan, of Boston radio & TV, were introduced and presented with mementos (see below). Jim got to read "Call me..." 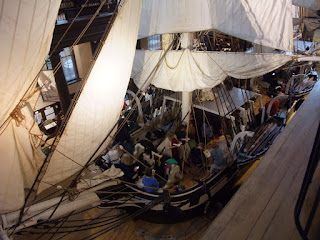 The live stream was moved to YouTube this year — better results for viewers, fewer headaches for Michael Lapides & staff. 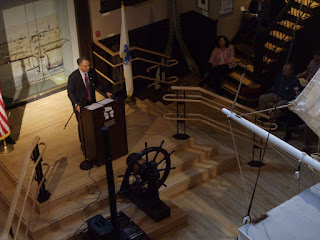 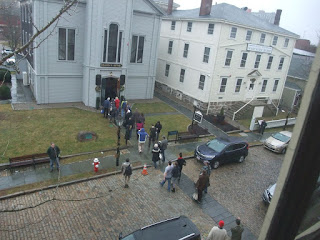 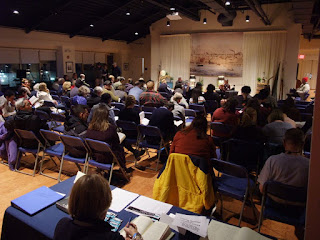 9:53 PM - still a decent crowd.
The MDM is always evolving! This year the usual readers' lecterns were replaced by comfy chairs. The atmosphere was less like a religious service and more like a cozy neighborhood book club (or Russell Baker's intros to Masterpiece Theatre).
Sightlines were not great for those in the back. Maybe the museum could raise the readers' area a bit for MDM24? 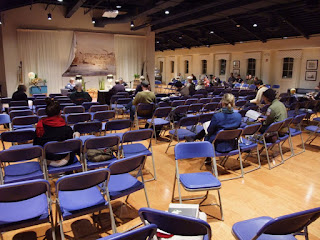 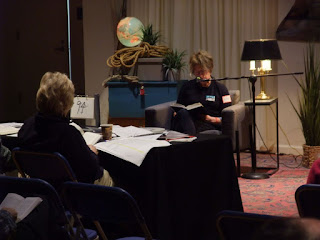 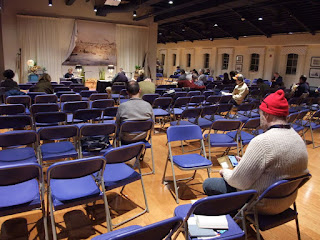 Tjitske's audience.
It's just after noon for her friends at home watching the live stream.
(Impossible to discern at this resolution, but that's Ira in the other reader's chair.) 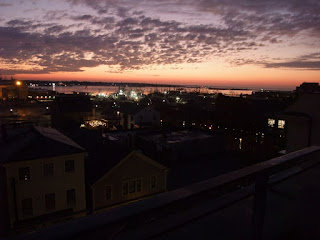 6:41 AM
The museum's Harbor View Gallery is aptly named. 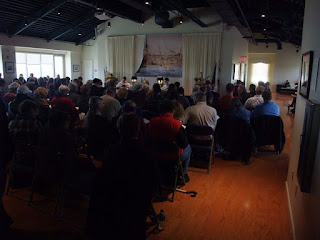 11:02 AM
Who doesn't love a good shipwreck? The audience swells for the dramatic finale.


...Then it's off to the pub to celebrate another fine MDM. 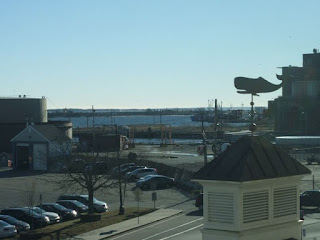 Monday morning...
For safety's sake, get a good night's sleep, then drive home. 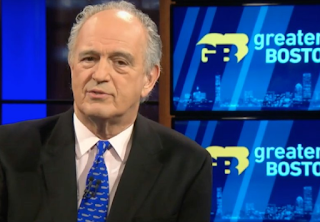 Posted by Gansevoort at 9:19 PM No comments: 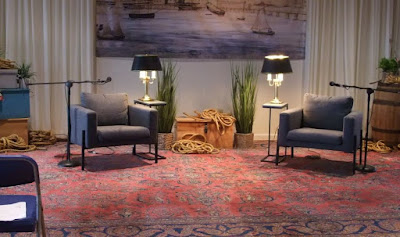 You can also enter the drawing for a seat at the historic Seamen’s Bethel, where chapters 7-9 are read/performed.

(Yes, the twin podia are gone, replaced for MDM23 by two comfy chairs.)
Posted by Gansevoort at 12:13 PM No comments:

Email ThisBlogThis!Share to TwitterShare to FacebookShare to Pinterest
Labels: MDM24, Seamen's Bethel
Newer Posts Older Posts Home
Subscribe to: Posts (Atom)
Sincere thanks to the team of dedicated staff and volunteers from the Whaling Museum and the Melville Society. Your work creates a uniquely enjoyable event for hundreds of us.