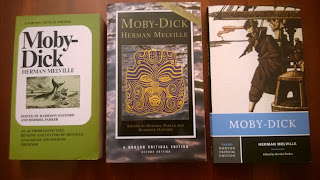 I just got the "Third Norton Critical Edition" of Moby-Dick (NCE3).  I had to order it through a third-party seller on Amazon, and it shipped from Europe.  At the moment, it doesn't appear to be available at all on Amazon, whether from Mr. Bezos himself or a third-party seller.  Oddly, even the publisher's website shows only the second edition right now.  A number of sellers at ABE Books (which has become an affiliate of Amazon) are offering it, however.

First, let me say how surprised, pleased, and honored I am to see Gansevoort's (mainly) and my humble efforts mentioned on page 687, in Mary K. Bercaw Edwards and Wyn Kelley's essay (written specially for NCE3), "Melville and the Spoken Word."  The essay digs deep below the surface of the Moby-Dick Marathon phenomenon, which is more extensive than even I had realized.  Of all the books that could have inspired so mighty a sound, why Moby-Dick?

Second, I am surprised and pleased to see that, while NCE3 does not have an apparatus as extensive as that of NCE1, the editor, Hershel "Mr. Melville" Parker, has provided a convenient list of emendations, something that was entirely absent from NCE2.  (This is the first Norton Critical Moby-Dick not to be co-edited by Harrison Hayford, who died in 2001, shortly before NCE2 came out.)

Between NCE1 and NCE2, the explanatory footnotes to the text itself were greatly and usefully expanded.  As far as I could tell from a quick spot-check, the footnotes in NCE3 have not changed from those in NCE2 (although a few have been split into multiple notes).  That's all to the good, as far as I'm concerned -- the quantity of footnotes in NCE2 was just right.

This is a new edition because the assortment of goodies at the end of the volume has been switched up, just as with NCE2.   Among the newcomers are Prof. Parker's "Glimpses of Melville as Performer" and six essays under the heading "Moby-Dick in the Twenty-First Century" (where Mary K. Bercaw Edwards and Wyn Kelley's entry appears).

But this is only a glimpse of how NCE3's critical caboose differs from that of NCE2.  Though my opinion is not entirely disinterested, all three editions are well worth having.


NCE3 is a "tighter" publication than NCE2. The pages are the same height, but are slightly narrower (by about 3/32"). The font, font size, and leading are identical. (See the Typeface Tally.) The width of the text block on the page is the same; however, top and bottom margins are reduced in NCE3, displaying 51 lines of text per page where NCE2 displayed 50. (The line breaks have changed, too; usually, but not always, rendering the same text in fewer lines.)

Measuring the thickness of 100 pages in each edition with calipers, the paper stock in NCE3 is about 14% thinner than that of NCE2. (The stock feels almost like bible leaves.) The show-through is about the same in each.

Hershel Parker, now in his eighties, has blogged that NCE3 marks "the end of a long career." The three Norton Critical editions represent over fifty years of rigorous work. Thank you, Mr. Parker.