The exhilarating film culture of the sixties and seventies would have been much less so without the informed insights of Andrew Sarris, who died yesterday. His column in the Village Voice was the reason I subscribed. (If I recall correctly, his review of a Woody Allen movie bore the headline: "What more do you want, and who else is even trying?") Scan the titles in this compilation of over forty years of Sarris Top Ten lists and dream of a time when movies mattered.

His influential survey, The American Cinema: Directors and Directions, 1929-1968, mentioned John Huston's film of Moby-Dick, unflatteringly, in the chapter Less Than Meets the Eye:


The turning point in Huston's career was probably Moby Dick. In retrospect, he should have acted Ahab himself and let Orson Welles direct. This was his one gamble with greatness, and he lost, and like the cagey poker player he is, he has been playing it cool and corrupt ever since.

Just reporting, not agreeing; although the idea of a Welles-directed M-D is such stuff as dreams are made on.
Posted by Gansevoort at 10:34 PM No comments:

One for the bibliophiles

Here's one for Bill Petit and other lovers of the good ole, physical book.
Posted by Gansevoort at 3:48 PM No comments:

The other end of the spectrum


Just back from the 17th Annual "Worcester Ramble," a day of readings from Joyce's Ulysses, staged at various locations throughout the city (Worcester, MA). Although only a few  months older than our beloved Moby-Dick Marathon (which turns 17 in January, 2013), they are quite different events.

First, the text. The Ramble doesn't even attempt to read the entire text of its target tome. Ulysses is about the same length as M-D, but it's hard (for me) to imagine any audience sitting through its entirety.  Joyce's stream-of-consciousness style — the non-sequiturs, invented words, oddball punctuation, etc. — and stylistic experiments — the language of Chapter 14 evolves through Latinate classical medieval, Germanic pre-Norman, High medieval, Renaissance,...  — may make the text interesting to read, but seem to make it less engaging to listen to. The abstruse references to Irish popular culture circa 1904 don't help its accessibility either.

Also, the story of Ulysses is less conventionally dramatic than that of M-D: a middle-aged advertising salesman and a twenty-something intellectual slacker wander around Dublin for a day, meeting each other after midnight, and returning to the elder's house to crash while the wife is upstairs basking in the glow her recent affair. Not at all like the apocalyptic confrontation that is the climax of irresistible Ahab meeting immovable Moby Dick ("from hell's heart I stab at thee..."). Many of us boomers were exposed to M-D in school or on TV, and the opportunity to painlessly familiarize ourselves with the text is tempting. Not so with Ulysses. Although John Huston directed a very fine version of Joyce's short-story The Dead, a creditable film version of Ulysses is yet to be made. (Perhaps the missing factor is a Ray Bradbury adaptation?)

Next, the venue. The MDM is truly blessed with the New Bedford Whaling Museum, its building as well as its staff and volunteers. Within the museum the MDM takes advantage of several "locations," and we merely have to walk across the street to experience Father Mapple's sermon in a chapel that was rebuilt in the image of John Huston's film set. The Ramble's audience numbers only about twenty, so organizers are free to lead us to locations throughout Worcester that are "evocative" of places in Dublin: a stone tower, a period cemetery, and a couple of pubs. (I was blue mouldy for the want of that pint...) 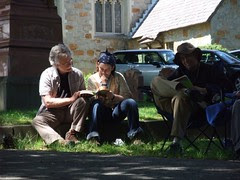 Finally, the size of the audience. By design or by fate, the Ramble is very much a small event. It has a DIY feel, a flexibility which the sleek vessel that is the MDM could not accommodate. The Ramble's organizers schedule a different set of chapters each year, but the group isn't hesitant to suggest changes as the day progresses. The quality of the readings is variable at both marathons, but the Ramble audience feels free to call out help with pronunciations or make extra-textual remarks; given the small numbers, these are tolerable disturbances. And while we have to suffer the hoarse, snarling shouts of some faux-salts at the MDM (dude, it's not Talk Like A Pirate Day!), there were no fake Irish accents heard at the Ramble, saints be praised.

Ulysses is much more focused on a particular day than Moby-Dick is focused on January 3, or on the city of New Bedford. Like Christmas, Bloomsday is one of those festivals that cannot be moved to the nearest weekend. The Ramble continues to be held on June 16, regardless of the day of the week.

If you're trapped in the cultural gravitational field of Boston or Northampton, keep an eye on the Worcester County Poetry Association, especially as Sunday, June 16, 2013 approaches.
Posted by Gansevoort at 4:43 AM No comments:

Ray Bradbury died yesterday at age 91. (Read his obituary on the NY Times site.) How many people, of how many countries, across two or three generations, first encountered Melville's story through Bradbury's screenplay?

As noted in a previous post, there's an enlightening 2008 interview in which Mr. Bradbury discusses his work with director John Huston on the 1956 film.

Astute readers know that this blog owes its title not to Melville, but to Mr. Bradbury.
Posted by Gansevoort at 4:27 PM No comments:

Email ThisBlogThis!Share to TwitterShare to FacebookShare to Pinterest
Labels: Ray Bradbury
Newer Posts Older Posts Home
Subscribe to: Posts (Atom)
Sincere thanks to the team of dedicated staff and volunteers from the Whaling Museum and the Melville Society. Your work creates a uniquely enjoyable event for hundreds of us.