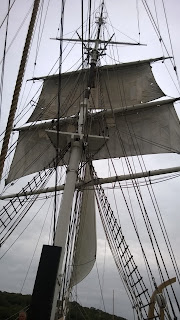 Ishmael spoke the truth when he observed that "this was a poor way to accumulate a princely fortune ... a very poor way indeed."  But, he goes on with philosophic equanimity, he is "quite content if the world is ready to board and lodge [him], while [he is] putting up at this grim sign of the Thunder Cloud."
Posted by Lemuel at 6:37 PM