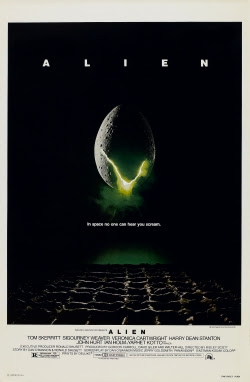 The 1979 sci-fi film Alien was supposedly pitched to producers as "Jaws in space."  But in some ways it resembles Moby-Dick more than Jaws.

Both Moby-Dick and Alien take place almost entirely aboard a commercial ship.  The Pequod is a whaler; the Nostromo a merchant vessel.  We enter into the shipboard lives of working crewmen -- people for whom sailing or space travel is just a job.  As their routine trip continues, however, both sets of crewmen discover that they have unwittingly signed up for something other than their jobs.  The men of the Pequod learn that they're serving their captain's plan of revenge, while the Nostromo's crew discover that they're being used as alien-bait by the military-industrial complex.*  Ultimately, both vessels are destroyed, and all the crewmen die but one, Ishmael and Ripley, who escape alone -- Ishmael on Queequeg's repurposed coffin, Ripley in the Nostromo's shuttle.

There is one enormous difference, of course: Moby-Dick, despite the earnest wishes of Hollywood producers and high-school boys, is really not a man-versus-monster story.  The whale, unlike the alien, belongs in our world.  Melville goes out of his way to impress upon us the plausibility of his narrative; we must not view it as "a monstrous fable, or still worse and more detestable, a hideous and intolerable allegory" (Ch. XLV, "The Affidavit").  More importantly, if we believe anyone other than perhaps Ahab, Moby Dick is not out to get the humans.  The alien, on the other hand, will kill the humans if they don't kill it first.

That difference accounts in part for Moby-Dick's greater complexity, even in its stripped-down film version.  The questions Melville asks are not as simple as how to kill before being killed.  Does malice lie behind the forces of nature?  Should we blame Ahab for what happens to the Pequod and its crew?  Do men deserve punishment for daring to be proud?  Should we accept as fact that we are all slaves?  "Who ain't a slave?"  (Ch. I, "Loomings")

*Interestingly, the industrial-individual conflict is reversed in the two stories.  Ahab dies because he has deviated from the business purpose of his cruise, whereas Ripley survives by defying the business purpose laid out for her.  Indeed, one of the movie's most memorable scenes is when the Nostromo's crew destroys upper management's representative on the ship (an android, which would not be killed by the alien and would therefore "survive" to pilot the ship home).  This may say something about differences in how business was viewed in the late 20th century as opposed to the mid-19th.
Posted by Lemuel at 1:44 PM