Like MDMs in New York and Provincetown, the BHS spread its reading across several days. Such an arrangement attracts local folks, who can sleep in their own beds and return fresh, but discourages out-of-towners from attending more than a couple of days. We made it to the fourth, final day.

Will there be an Arrowhead MDM for Melville's 200th birthday next year? We can hope. One might dream of a reading that takes place inside the actual home, and runs through the night to finish on August 1. (Are there any reports of hauntings at Arrowhead?)

The 2018 reading was held in the barn that houses Arrowhead's ticket office and museum shop.

Peter Bergman, Director of Communications for the BHS, recruited readers as we entered. He explained: read from the "podium copy" until the bell rings, then make a pencil mark where you stopped.

Each person read for ten minutes, after which Peter said something like, "Sarah, thank you so much," and called the next reader. Things proceeded calmly.

Like the Mystic MDM, no microphone was necessary. The group grew to no more than fifteen.

One reader stood out. She was maybe ten years old(?) and had very little problem with the knotty text. All the best to her, and her family! 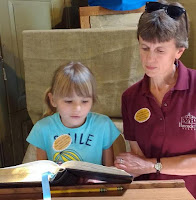 A better photo, copied from the BHS Facebook page.

At the "Finis," Peter announced that over the four days of the marathon there were 85 different readers, plus 23 folks who simply listened.

Then he took his harpoon and posed for photos.

Thanks to the volunteers and staff of the Berkshire County Historical Society for a well run, "neighborly" MDM. 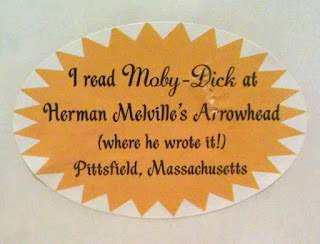 Posted by Gansevoort at 6:58 PM