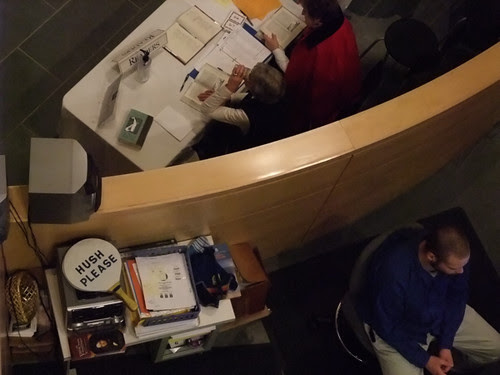 If you ever attend the New Bedford Whaling Museum's annual Moby-Dick marathon (and I hope you do), you may be surprised by what you do not see.  No one stands at the door to charge admission, take tickets, or check IDs.  No police officer or security guard patrols the entry to expel drunks or hooligans.  None of the listeners shouts out jokes or editorial comments.  No disputes arise over whose seat is whose or how much space someone takes up with her gear or when or how long someone is permitted to read.  None of the readers dispenses with the text and launches into a speech on his particular obsession.

The marathon proceeds in surprisingly good order, notwithstanding that it is free and open to all, in the heart of a modern city.  I don't know what would happen if someone chose to disrupt it; I imagine there are city police ready to respond to serious trouble.  But the fact is that the attendees behave themselves spontaneously.

We may attribute this partly to the type of person that a marathon reading of a long, complex, philosophical, 19th-century novel is bound to attract -- contemplative bookish folk with an unusual idea of what constitutes entertainment.

But something else is at work as well, something peculiarly of New England.  In his masterpiece Patriotic Gore: Studies in the Literature of the American Civil War, critic Edmund Wilson writes (in his chapter on Harriet Beecher Stowe) about "the crisis of Calvinist theology" in 19th-century New England, when the old-line Congregationalist ministers started losing large numbers of worshipers to more forgiving churches and denominations.  Yet, as he also points out, the Calvinist mind-habits survived.  Hard work, lawfulness, and the odd blend of self-reliance and community service did not vanish when the doctrine of predestination softened.  Underneath the Emersonian kumbaya, it supplied the core of steel evident in the abolition movement and the Civil War.

We detect its vestiges today in Massachusetts, in orderly public events such as the Moby-Dick marathon.  The mature gents and ladies who smoothly and quietly run the show, the volunteers who provide dinner and nighttime snacks with uncomplaining regularity, the readers who respectfully take us through Melville's creation, the listeners who peacefully follow along -- I don't believe quite the same picture could be seen anywhere outside New England.
Posted by Lemuel at 11:19 AM