The Moby-Dick Marathon in Its Procedural Aspect

People often ask me, "So, Lem, just what goes on at the Moby-Dick marathon anyway?"  (Actually, nobody ever asks me that.  What usually happens when I mention that I'm going to New Bedford a week after New Year's for a marathon reading of Moby-Dick is that the other person mumbles something about needing to refresh his drink before wandering off purportedly in search of the bar.)

The marathon has evolved over the years and will no doubt continue to develop.  It is currently a three-day affair.  Everything takes place in the New Bedford Whaling Museum except for one side excursion that I will mention in due course.  On Friday evening, the marathon proper is heralded by a dinner (reservations required), after which a lecture is given by a Melville scholar.  These preliminaries attract, I would estimate, 50-100 people.  Next, on Saturday morning, there was this year a new event that I hope will be repeated -- a stump-the-scholars program in which six Melville experts were divided into two teams and competed in trying to answer Moby-Dick-related questions posed by the audience (and in a few cases by the emcee, one of the curators at the museum if I'm not mistaken). 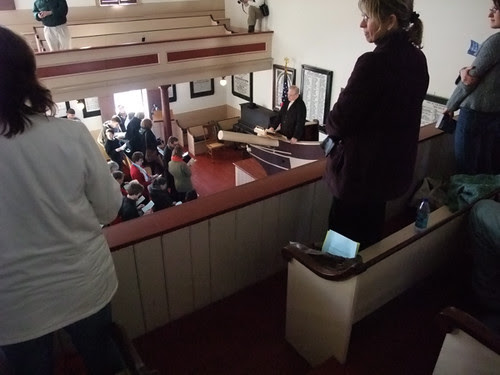 Finally, at noon on Saturday, the marathon itself begins.  It starts off in the Lagoda Room (which houses the museum's fascinating half-size whaling ship, the Lagoda), where Chapters I through VI are read.  Then everyone packs up and moves across the street to the Seamen's Bethel for Chapters VII, VIII, and IX.  These are the only chapters that are read in the very spot where Melville set them.  Then camp is moved again, this time to the museum's Jacobs Family Gallery (a large "event space" stretching up from just below the lobby level to the second story.  This is where everyone settles down for the long haul, from about 3:00 on Saturday afternoon to about 1:00 on Sunday afternoon.

The reading moves to different spots in the museum for two segments: Chapter XXXII (Cetology) is read in the gallery containing a complete sperm whale skeleton, and Chapter XL (Midnight, Forecastle) is performed by a troupe in the auditorium.  (This year, they added several other chapters to the auditorium segment.)  But by 9:00 or so, we're in the Jacobs Family Gallery for the duration.

Around 6 or 7 pm on Saturday, the gracious volunteers serve clam chowder, baked beans, and bread pudding in an adjoining room.  Coffee, tea, and mulled cider are provided through the night, along with assorted snacks (healthy and otherwise).  The "break room" is also the place to chat with other marathoners.

Attendance is strongest at the beginning and end of the reading.  As Saturday wears on and passes into Sunday, the audience gets thinner and thinner.  It hits bottom around, say, 1 to 4 am on Sunday, when there are perhaps as few as 20 people in attendance, half of whom are asleep. Then the crowd returns with the sun on Sunday, waxing until the final crowd-pleasing duel between Ahab and the whale.

Thank yous, acknowledgements, and it's over for another year.
Posted by Lemuel at 8:49 PM

Email ThisBlogThis!Share to TwitterShare to FacebookShare to Pinterest
Labels: logistics