Lemuel's post on Edward Thompson Taylor set me off on a wave of Web surfing.

"Father Taylor" is mentioned by name twice in Richard Henry Dana Jr.'s memoir, Two Years Before the Mast. Once for absolving seamen of blame should they consent to orders to work on a Sunday; once as a subject of conversation with the mates of the Lagoda (yes, that Lagoda, which was a merchant ship from 1826 to 1841), at anchor in San Diego:

One of their first inquiries was for Father Taylor, the seamen's preacher in Boston. Then followed the usual strain of conversation, inquiries, stories, and jokes, which one must always hear in a ship's forecastle, but which are, perhaps, after all, no worse, though more gross and coarse, than those one may chance to hear from some well-dressed gentlemen around their tables.

According to Find-A-Grave, Taylor's privateer was captured by the British, and he spent time in Dartmoor Prison. In 1847 he served as chaplain on board the U.S.S. Macedonian, transporting famine relief to Ireland, where he preached in Cork as well as Glasgow, Scotland. He is buried in Mount Hope Cemetery in Mattapan (south Boston).

The biography that Lemuel mentioned, Father Taylor, the Sailor Preacher, is here on Google Books. Of note is the following:

...1833, realized the completion, at the cost of twenty-four thousand dollars, of the world-known edifice, the Seamen's Bethel, North Square, Boston. 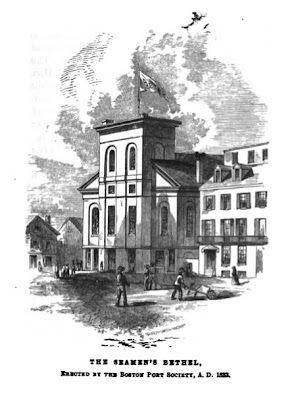 In 1847 the Mariner's House was built across the square from the Bethel. It still offers budget accommodations to working seamen.

According to northendboston.com, the Seamen's Bethel became the Sacred Heart Church after Taylor's death in 1871. It remains so today. Looking at an exterior photo, I have to wonder if any of the original Bethel was preserved. (Road trip, Lemuel!)

Emerson referred to Taylor as the "Poet of the Sailor and of Ann Street" (see Lem's post). Ann Street gets several mentions in Two Years Before the Mast as the seaman's main drag in Boston; e.g., "In a few hours I was down in Ann Street, and on my way to Hackstadt's boarding-house..."

Until 1852, when it was renamed North Street (which name it still carries) in an effort to improve its image, the infamous Ann Street area was known as the "Black Sea." In 1851, police "estimated that it was home to 227 brothels, 26 gambling dens, and 1,500 establishments that sold liquor." (Wikipedia) 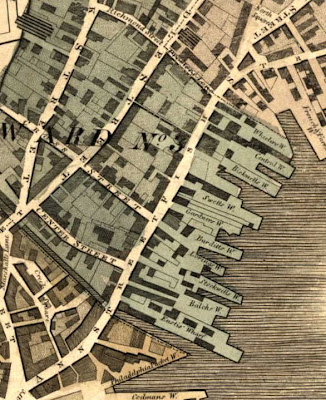 Looking at the 1814 map above, you can see Ann Street running NNE along the wharves, becoming Fish Street, and passing the southern tip of the triangular North Square. (You can view the entire map at this Boston Public Library site.) Father Taylor's Bethel was across the street from the NE corner of North Square. The Mariner's House is on the West side of the square. Cross Street and Richmond Street, both running NW from Fish Street, exist today, but Ann/Fish Street is no longer the eastern-most street of this area.

Posted by Gansevoort at 3:06 PM