According the New Bedford Whaling Museum's blog, the 16th Moby-Dick Marathon attracted a record number of visitors -- more than 2,900 over the weekend.  During most of the reading on Saturday, there were few or no empty chairs, unless you resorted to the overflow seating in the Cook Memorial Theater, where the reading was shown remotely with a slight delay.

Spots in the main seating area, in the Jacobs Family Gallery, did not begin to free up until after the performance of Chapter XL ("Midnight, Forecastle") had concluded in the Theater, at about 10:00 p.m. as I recall.  From this point forward, the year-over-year increase in visitors became less noticeable.  There seemed to be a few more sleepers than at earlier MDMs stretched out on the mezzanine, and the number of awake participants seemed to dwindle more gradually, and to come not quite so close to zero, as in my previous years. 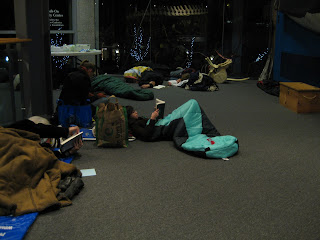 This increase in participation was good for all concerned -- except for us standby readers, whose chances of getting to read are inversely proportional to the number of people who show up.  I did get the opportunity to read once.  My selection happened to be "The Jeroboam's Story" (Ch. LXXI),  which I much prefer to what I read last year, about Derick De Deer and his lamp-feeder (Ch. LXXXI).  But neither I nor any of the other stand-bys had the chance to read more than once during the course of the night. 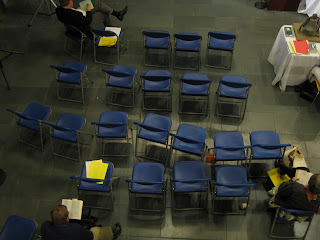 Just as in MDMs past, between midnight and sunrise, those who remained, and remained awake, were overtaken by the same surreal feeling of being trapped with Ishmael in a sea of darkness, listening to him go on and on, in a stream of seemingly inexhaustible eloquence, about Steelkilt and gams and tuns and sharks and whale skeletons and monstrous pictures and Malaysian pirates.  Meanwhile, the snack food in the break room slowly disappears, while each cup of coffee and tea you drink has less effect than the last.  Close to dawn, like Ishmael trying to make a bed out of a bench at the Spouter Inn, you find that every position you assume is uncomfortable.

A few times, to stretch my legs, I went out into the dark to get some shots of the deserted New Bedford streets.  By this time, the unusually balmy weather had turned colder.  It was still not as bone-chilling as in prior years, but at least I now found it easier to relate to impoverished Ishmael when he wandered the wintry New Bedford waterfront in search of economical lodgings. 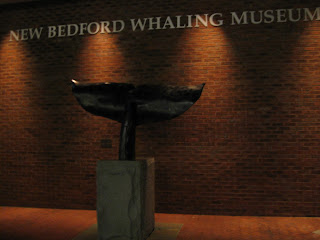 Email ThisBlogThis!Share to TwitterShare to FacebookShare to Pinterest
Labels: MDM16