"They have killed him, the Forgiver" 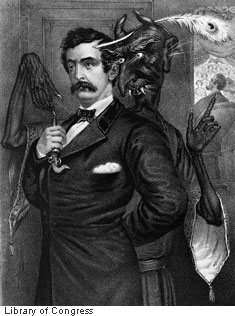 One hundred and forty-six years ago, at approximately 10:20 pm, the audience watching Our American Cousin in Ford's Theatre in Washington, D.C., was startled to hear a woman's scream from the president's box and see a young man, whom many recognized as the actor John Wilkes Booth, jump clumsily from the box to the stage, shouting "Sic semper tyrannis!" before running out the back of the theatre.  The audience soon learned that the president had been shot in the back of the head.  He would remain unconscious until his death the next morning at 7:22.


Abraham Lincoln was the first U.S. president to be assassinated.  Among those shocked by the deed was Herman Melville.  His poem "The Martyr" indicated (in his words) "the passion of the people on the 15th day of April, 1865."  The first stanza:

In his note on the poem in Battle-Pieces, Melville sought to explain its accusatory tone in terms of the "period of excitement" immediately following the assassination.  At that time, "the thought was by some passionately welcomed that the Presidential successor [i.e., Vice President Andrew Johnson] had been raised up by heaven to wreak vengeance on the South. ... But the expectations built hereon (if, indeed, ever soberly entertained), happily for the country, have not been verified."
Posted by Lemuel at 11:17 AM