How To Prepare for the All-Night Reading 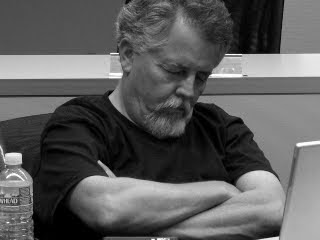 What, if anything, can you do to stay alert for the entire 25-hour reading of Moby-Dick? Lemuel seems to have no problem staying focused for the whole show, while I start to flag around 4:00 AM and nod-off in my chair a couple of hours later. Chalk it up to age (mine), intelligence (his), or the fact that Lemuel arrives sober as the chief justice of the Massachusetts Supreme Judicial Court, while I less so.

A troll of the Web returns lots of suggestions from college kids who face all-night cram sessions: caffeine, B-vitamins, pumpin' music, occasional 10-minute naps (and bumming Ritalin from dorm-mates [not recommended by Lemuel or me]).

One article cites "chronobiologist" Cynthia LaJambe who, even after her studies at Walter Reed Army Institute of Research (WRAIR), can only advise "a short nap [less than 20 minutes] and a moderate amount of caffeine, like a cup of coffee, is still the best approach."

An article in The Guardian gives advice for cricket fans trying to go for days without sleep so they can watch The Ashes match series televised from Australia. They recommend: a high-protein meal beforehand, high-protein snacks during, no alcohol, no large doses of caffeine, vitamin B supplement afterwards.

One study holds particular promise for us Marathoners: "Sleep Extension Improves Performance and Facilitates Task Acquisition During and Following 7 Nights of Subsequent Sleep Restriction," by Dr. Tracy Rupp, also at WRAIR. Its findings were summarized by BBC News. The bottom line is: extra sleep each night of the week before the MDM will help you "perform" better, and recover faster. They call it "banking sleep." (Dr. Tracy also recommends naps.)

Posted by Gansevoort at 8:51 AM