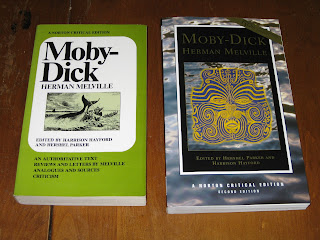 Norton Critical Editions are familiar to generations of English majors.  They contain "authoritative texts," explanatory footnotes, and generous supplementary material for budding scholars to cut their critical teeth on.  If you're the kind of person who always wants to know more when reading a classic -- what inspired the author, what was going on in his life during the book's creation, how readers and reviewers responded to it in his day -- the Norton Critical Edition will go far toward satisfying your curiosity.

The publisher of Norton Critical Editions -- W. W. Norton & Company, Inc. -- is a rare bird.  In the publishing industry, where the landscape never rests and the returns on investment rarely climb as high as zero, Norton has managed to remain privately held and (to all appearances) healthy for over 85 years.  It was founded in 1923 as a non-profit, to publish lectures delivered at the adult division of Cooper Union.  (The company's current name comes from one of the founders, William Warder Norton.)  Norton, who was an importer-exporter, soon decided to devote himself full-time to publishing and used his importing know-how to obtain U.S. publication rights to various non-fiction works first published in Europe.  Norton also seemed to have a knack for sniffing out important titles, acquiring rights to, for example, Bertrand Russell's Philosophy and Jose Ortega y Gasset's Revolt of the Masses.  And by 1930, he had begun to tap what would prove to be a lucrative market after World War II: higher education.

When William Norton died in 1945, his widow sold much of her stock to the company's employees.  The company has been employee-owned ever since.  Reportedly, about 50-60% of the stock, all of which is subject to transfer restrictions, is held by members of its board of directors, and the remainder is held by about half of its 400 employees.

I haven't been able to determine when Norton started putting out its Critical Editions.  The earliest one I've been able to find on Abebooks.com is a Wuthering Heights published in 1963.  As you can see from the linked item, Norton Critical Editions originally had rather plain covers, printed in two colors with no artwork.  (The original cover of the NCE Moby-Dick, first published in 1967, can be seen at Mr. Pettit's blog.)

The Norton Critical Edition of Moby-Dick is now in its second edition.  Pictured above on the left is the first, 1967 edition, with the last cover it had.  On the right is the second edition, which came out in 2001 (hence the "150th Anniversary" banner dimly visible running across the upper right corner of the cover).

As you can see, the second edition is slightly taller and wider than the first, with a splashier cover.  It contains far more explanatory footnotes than the first edition (which had always struck me as very stingy in the footnote department).  They've kept most of the supplementary material -- including the crudely but effectively illustrated discussion of how whaling was done -- and they've added a good deal of new matter.  Most notable among the new additions are a short essay on Melville's reading, about 50 pages of source material on how Melville was viewed before the appearance of Moby-Dick, and an essay on "the grim effects" that Moby-Dick had on Melville's later career.  In addition, several of the critical excerpts have been switched out for different entries.

But wait, shipmates.  All is not as it should be.  Sadly, the editors decided to jettison from the second edition one of the first's most useful (and most scholarly) features: the lists of variant readings.  The first edition contained 28 pages detailing the textual differences between the first English and American editions, and textual emendations that the scholar-editors (Harrison Hayford and Hershel "Mr. Melville" Parker) determined were needed.   Thus, the serious reader could find out the sources of differences in wording among the various versions in print and rule out (or not) mere modern typos.  Now, it is true, as the second edition's Preface explains, that the publication of the Northwestern-Newberry edition of Moby-Dick, detailing textual variants, made inclusion of a similar section in the NCE duplicative.  But why make purchase of an additional volume necessary?

As so often happens, the new does not surpass the old.  By all means, buy the second edition.  But don't discard the first.

Earlier entries in this series: