Facing the Podium at the Moby-Dick Marathon 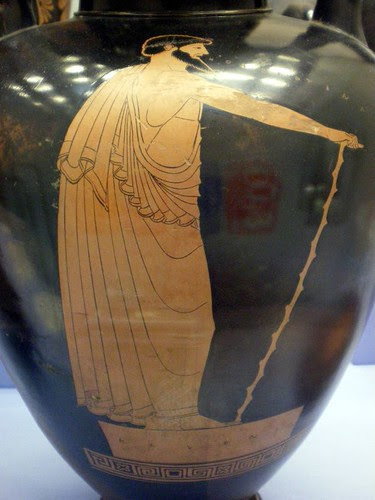 Lemuel's post of January 19 recalled other associations that have struck me at MDMs. I can't be the only one who is reminded of the rhapsode of ancient Greece, who spun out epic poems from memory. These ancients competed, while at the MDM a joyfully co-operative and inclusive atmosphere is maintained. Still, one year we may see someone at the podium who recites from memory. (Most of us could probably reel off the opening paragraphs without much trouble.) Lemuel is well-qualified to sing the parallels between and Ahab and Achilles:

Sing, O goddess, the anger of Achilles son of Peleus, that
brought countless ills upon the Achaeans. Many a brave soul did
it send hurrying down to Hades, and many a hero did it yield a
prey to dogs and vultures, for so were the counsels of Jove
fulfilled from the day on which the son of Atreus, king of men,
and great Achilles, first fell out with one another.

The arena for the rhapsode was a religious festival, which the MDM could be argued to be; a celebration of literary genius, of the novel as an art form, of the days of sail, of Melville himself.
A second association for me (sans apology) is with the post-nuclear tribe of kids in Mad Max Beyond Thunderdome. In some paranoid, sleep-deprived lunacy, a Marathoneer might envision MDM63, where survivors take turns "doing the tell" of the barely-remembered book, struggling to keep it alive one more generation.
Posted by Gansevoort at 12:04 PM